Below is the tweet Catherine Cortez Masto sent out at 8:59 pm urging people to come to the polls 2 hours after the polls, during early voting, should have officially closed. 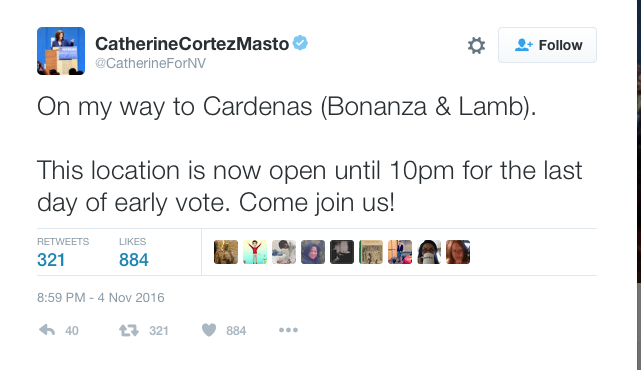 Our video on Newmax TV Vegas uncovers the fraud that has allegedly occurred in AD-15 in the November election. The citizens of Nevada are tired of our Secretary of State and the Registrars office in Clark County not protecting the sanctity of our vote.  They have stonewalled Stan Vaughn’s efforts and are seemingly unwilling to assist Stan Vaughn in his efforts to restore integrity in our election system.  Therefore, we calling on the DOJ and AG in the Trump Administration to look into this evidence and take appropriate actions.  This video has been forward to a members in our state and national party and we will continue to push for a federal investigation into this widespread fraud which has impacted local and national officials and the Nevada propositions. Stay tuned.

Below is a screen shot of an email from Stan Vaughan after he met with officials and investigators today who found him because of our story.  Additionally, we have witnesses who are now coming forward who work at the election department.  Many thanks to Rob Lauer of NewsmaxTV Las Vegas for providing us with a large platform to shine a light on this potential fraud and corruption.  Stay tuned…