Voting is the most precious right of every citizen, and we have a moral obligation to ensure the integrity of our voting process.

Morality and integrity are not two words used by informed, objective voters to describe Hillary Clinton, and her hypocrisy is hard to measure.  But what can be measured is the amount of fraud and deceptive practices the Democratic National Committee used, as uncovered by Wikileaks, to rig the 2016 primary election.  In part one of this series, Katy Grimes exposed how the California primary was rigged to disenfranchise many Democrat, Independent and Republican voters in order to secure a win for Hillary Clinton.  The Arizona secretary of State, Michele Reagan, confirmed that voter fraud occurred during the AZ primary, potentially impacting millions of voters. In Brooklyn NY, 126,000 voters were purged from the voter rolls, and election corruption has become a well-documented standard in Illinois.

Which begs the question: If the DNC was willing and able to rig a primary election, what would prevent them from doing the same in a national election—especially in the battleground states of Colorado, Florida, Iowa, Michigan, Nevada, New Hampshire, North Carolina, Ohio, Pennsylvania, Virginia and Wisconsin?

Destroying (or hiding) the paper trail

A study done on the Democratic primary is pointing to signs of election fraud in multiple states. Two statisticians studied exit polls and other data and compared them to actual election results. Axel Geijsel of Tilburg University in The Netherlands and Rodolfo Cortes Barragan from Stanford University in California published the study on June 7, 2016.

When we looked at the results of the Republican primaries, we did not observe that any candidate kept gaining a larger and larger share of the vote at larger precincts (meaning the lines were relatively stable as precinct size increased). However, when we looked at the Democratic primaries, we observed severe abnormalities. Namely, the share of votes that Hillary Clinton received kept increasing (leading to a whopping 25%). This type of statistical abnormality is seen in almost every parish (county). It does not appear in any parish for the Republican primary.

Their conclusion? Election fraud is occurring and it is benefitting Hillary Clinton–especially in states that use unaccountable, electronic voting machines. 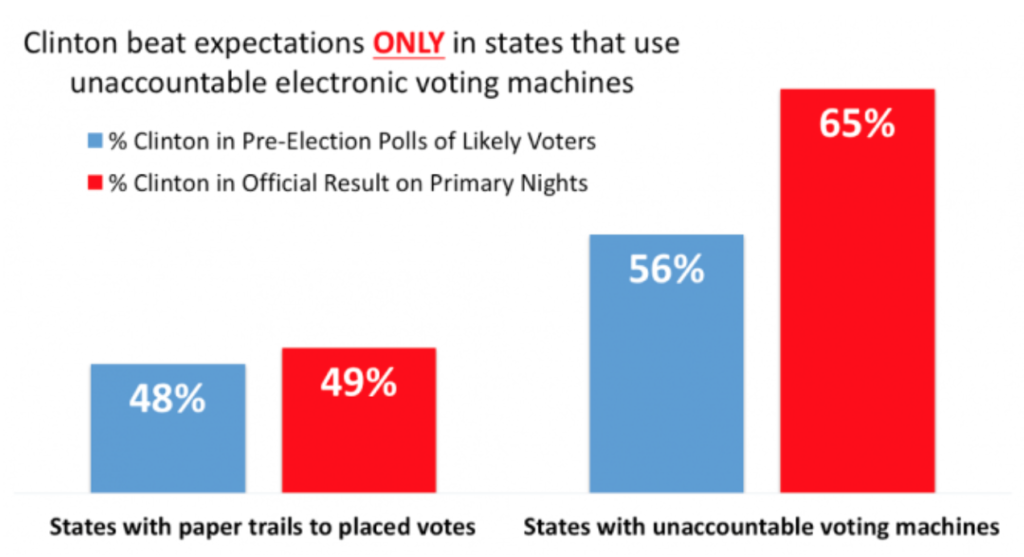 Further evidence in possible tampering with electronic voting machines comes from Clark County, NV. According to NewsMax TV in Nevada:

District Court Judge Michelle Levitt dismissed requests, filed by three June Republican Primary candidates, to review the original paper ballots cast in their assembly districts, this despite expert testimony that there were numerous errors and unexplained anomalies in the vote count. Republican candidates Diana Orrock (AD9), Blaine Jones (AD21), and Mary Rooney (AD41) presented their case in a day-long hearing. The paper ballots are those printed out for the voter to inspect before casting his or her vote.
Six Republican candidates from the June 2016 primary election had filed “Statements of Contest” in Clark County District Court based on NRS 293.410(f),  which allows for an election contest on grounds that that there was a “possible” malfunction in the voting or counting devices used to record and tabulate the votes.
Attorney for the candidates, Joel F. Hansen, argued, based on the sworn expert testimony presented at the hearing, that it was not only possible but very probable that there were malfunctions, either unintentional or deliberate, somewhere in the vote counting, and that the Judge should allow these candidates access to the election materials, including paper ballots, which are being kept secret by the Registrar of voters. Hansen argued that the contestants only wanted to find out the truth by actually inspecting the paper ballots, rather than just believing the word of the Registrar, who had refused their computer security expert Robert Frank access to the ballots, despite the Registrar’s claims that such access was freely granted.
The initial discrepancies were discovered by independent research into County Statements of Vote by Nevada’s Citizens Task Force for Voter Rights (CTFVR).  Detailed analysis revealed that the Clark County “Statement of Vote” and the associated abstracts were misleading because it was found that the vote abstract numbers for those Republican Assembly Races did not correspond to those races.  Instead of reflecting just the Republican votes, the abstract reflected all votes cast, Democrat and Republican. Reporting the numbers this way concealed how many votes were counted which were cast by phantom voters.  These “over-votes” are impossible if the voting machines are functioning properly. Also, the official results showed huge percentage swings between the votes cast during early voting and the votes cast on Election Day.  Statistics show that these swings should not and cannot happen without some type of malfunction in the system, either unintended or deliberate.

“It was clear that the Clark County Election Department, the District Attorney, and the Judge did not want the voters to have the opportunity to compare the actual paper ballots with the computer tallied results, which computers have been proven before to be fraught with erroneous and incorrect voter tally information,” said USAF Retired Colonel Bob Frank, Chair and Co-founder of CTFVR. “With so many national reports of similar election machine failures and increasing hacking into government computers, candidates are obligated to all Nevada voters to protect the integrity of our election system. Trustworthy elections are one of the foundations of our Republic. It is our duty to help ensure there is end-to-end elections integrity.”

The return of the vast Right-Wing Conspiracy

According to a Pew Research Center survey, only 31 percent of Americans were confident that “the votes across the country were accurately counted” in the 2012 election.  A separate Pew survey in 2012 found that one out of eight voter registrations is inaccurate, out-of-date, or a duplicate. Some 2.8 million people are registered in two or more states, and 1.8 million registered voters are dead.

The Heritage Foundation has published a detailed list of approximately 200 cases of voter fraud from across the country.  As reported by the Daily Signal:  “In Philadelphia, the setting of the infamous 2008 New Black Panther Party voter intimidation case, four local election officials have been charged with casting multiple votes in the city’s 18th Ward in a precinct in which three of them didn’t even live and were not registered to vote. This case illustrates the importance of poll watchers, because it was a local poll watcher who saw what happened and brought it to the attention of the district attorney’s office. This is the same district attorney, Democrat Seth Williams, who indicted two Democratic state legislators last year for accepting bribes in exchange for voting against a voter ID bill after the Pennsylvania attorney general, Kathleen Kane, also a Democrat, refused to prosecute the case.”

Kathleen Kane was elected Attorney General in 2012 and was considered a rising star in the Democrat Party….until a grand jury indictment and felony conviction forced her resignation.

Hillary Clinton has just called for illegals, aka “dreamers,” to “get out the vote.” Her partner in crime, Terry McAulliffe, will defy a courts order by granting clemency allowing convicted felons to vote in the swing state of Virginia.

Electronic voting machines are susceptible to hacking and manipulation (READ: How to hack an election in 7 minutes).  Citizen journalists like James O’Keefe has a video series on voter and election fraud in various states.  Just last week he posed as Eminem to receive a ballot in Michigan. In Washington DC, a white male reporter of O’Keefe’s was given Eric Holder’s ballot.

The left-wing DNC sycophants in the media cannot have it both ways.  They cannot proclaim that Hillary Clinton won the Democrat nomination because of election rigging and fraud, and in the next breath claim that Donald Trump is “dangerous” to warn voters about election rigging and fraud. To dismiss Donald Trump’s warnings as dangerous and conspiratorial is not only laughable, but is gravely dangerous to the integrity of the election process.  But then again, what would the Democrats know about integrity?  They just rigged one election, why not one more?