What makes 350 so devious, is that they hijack public emotions (and ignorance) using phony “divestment” as a disorganizing tool to redirect activism away from effective work.

A coalition of environmental activist groups, led by 350.org, is promoting a series of “Break Free From Fossil Fuels” training sessions and protests during May 4-15, 2016, at locations involved in fossil fuel production or transportation. The protests will occur at key sites related to production and transport of fossil fuels, including rail lines and yards, in the United States and Canada.  The problem?  350.org only cares about fossil fuels when the cameras are rolling.

It is painfully apparent that the organization does not believe in the movement that they are said to lead, but rather a movement that would line the pocketbooks of the 1% while destroying wealth and opportunity for the 99% percent–buiding a quasi-peasantry at the expense of faulty science and reliant on their accumulation of power.  But don’t take it from me, these Climate Change Charlatans admit that climate change is about power in their very own YouTube video.  Sounds quite palatable with an English Accent until you peel back the Gibson onion.

Bill McKibben: A false prophet of the profiteers.

Bill has been a busy little Leftist, and by Leftist I mean a person who uses the power of fear, rigged data, and the ignorance of the uniformed, in order to create economic upheaval that would make any   environmentalist proud.

Peter Ferrera said it best back in 2009:

But for the people who rabidly embrace the doctrine of human-caused global warming, none of this matters. For them global warming was never really about science or data. It is about power. Man-made global warming is a powerful justification for a massive expansion of government controls over human activities. That is why the ruling classes, from Al Gore to the editorial writers at the New York Times, who know nothing about science, so heartily embrace it. The United Nations sees global warming as the ticket to attaining the power of a world government. That is why the UN doctors the reports of its science panels.

But what this massive increase in government power would mean is a dramatic loss of freedom and prosperity for average working people the world over. Global warming regulation, in fact, would involve a massive assault on the standard of living of the middle class, particularly in America. That is why this battle is so important.

Barack Obama tried to push the Climate Agenda as far as he “legally” could and  blocked the Keystone Pipeline. His billionaire donors, like Tom Steyer, were outspoken critics of the president’s slow advancement of their climate change agenda and his lackluster assistance in their war on the fossil fuel industry.  Barack Obama met the billionaire’s challenge with this political and realistic statement given at Tom Steyers manse with Bill McKinnon present:

The politics of this are tough,” Obama said. “Because if you haven’t seen a raise in a decade; if your house is still twenty-five thousand, thirty thousand dollars under water; if you’re just happy that you’ve still got that factory job that is powered by cheap energy; if every time you go to fill up your old car because you can’t afford to buy a new one, and you certainly can’t afford to buy a Prius, you’re spending forty bucks that you don’t have, which means that you may not be able to save for retirement.” He added, “You may be concerned about the temperature of the planet, but it’s probably not rising to your No. 1 concern.”

Bill and Tom walked away with a mission to build a movement to remove power and wealth from companies and their beneficiaries (the people), and transfer that power and wealth to governments and related entities.

According to Matt Ridley in the WSJ:

In essence,  “the more energy you have, the more intricate, powerful and complex you can make a system. Just as human bodies need energy to be ordered and functional, so do societies. In that sense, fossil fuels were a unique advance because they allowed human beings to create extraordinary patterns of order and complexity—machines and buildings—with which to improve their lives.”

350.org has no plan to improve peoples lives as can be seen in the tens of millions of dollars pouring in from 50 donors, who, ironically, are heavily invested in the fossil few industry.

The Profiteers of the False Prophet

We can’t bankrupt Exxon. But we can politically and morally bankrupt them.

Consequently, breaking free from fossil fuels also means global disinvestment in the fossil fuel industry, according to Bill McKibben and 350.org.  Yet there are about no less than 50 problems with that mission:  according to Inside Philanthropy, 350.0rg is funded by numerous individual donations and by grants from 50 foundations, including the Rockefeller Brothers Fund and Rockefeller Family Fund.

In 2014, the Rockefeller Brothers Fund received a lot of press for claiming they were divesting from fossil fuels: 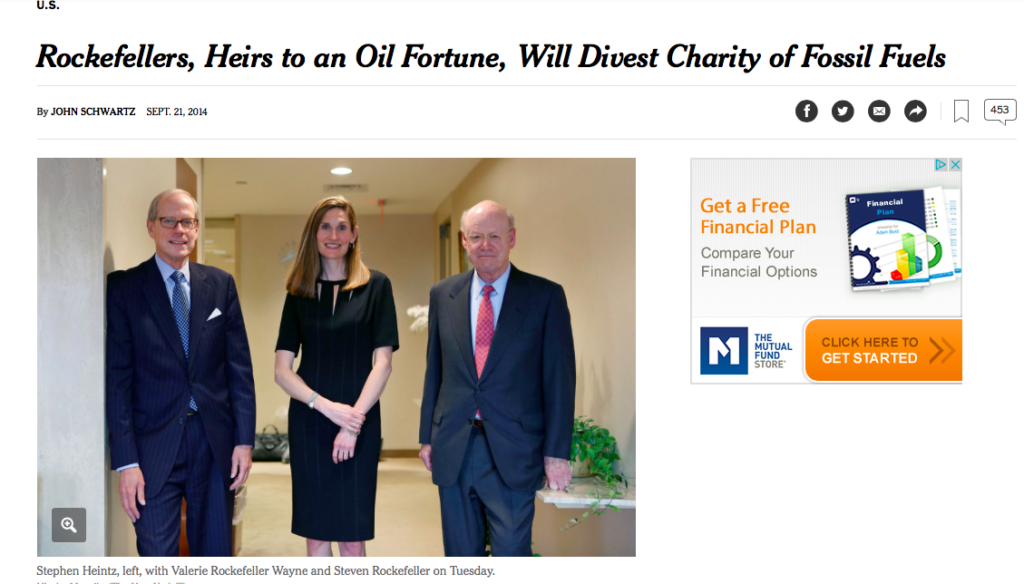 However,  they ultimately acknowledged that: a) they weren’t divesting from Exxon and b) they had had no success urging Exxon to alter its course on fossil fuels.

The Rockefeller family engaged in shareholder activism with Exxon Mobil, the largest successor to Standard Oil. Members have met privately with the company over the years in efforts to get it to moderate its stance on issues pertaining to the environment and climate change. They acknowledged that they have not caused the company to greatly alter its course. –NY Times, 9/21/14

As explained by Jay Taber:

“When it comes to the 350 agenda, they leave out the boycott of fossil fuels, and the sanction of fossil fuel corporations, and instead press for divestment by institutions like colleges and universities. All this divestment does is make once publicly-held shares available on Wall Street, which allows trading houses like Goldman Sachs to further consolidate their control of the industry.

The inheritors of the Standard Oil fortune (Rockefeller Brothers) would not be funding 350 were they not thus disempowering their naive followers.”

If Bill McKinnon and his climate cronyists were truly interested in sustainability and climate, they should lead by example and not through force.  But leading by example would require a warming to the truth and the truth cannot be found by the pay-to-play scientists endowed by governments (NGOs), related non profit entities, and elites–like Bill McKinnon, who prefer to use fear, and not truth, to power.