Unfunny Comedian Kathy Griffin published an unfunny video of a photo shoot of in which she is depicted holding aloft the president’s severed head.

People across the country were appalled, disgusted and outraged.

I’m an easy mark for a comedian; nothing Kathy Griffin has ever said made me laugh.

The unfunny Kathy Griffin then issued a video apology and even begged for forgiveness from her adoring humorless liberal fans for the unfunny photo shoot of her holding the bloody, severed head resembling Trump. “I am sorry. I went too far. I was wrong,” Griffin tweeted.

“Tyler and I are not afraid to do images that make noise,” Griffin said in the video posted by TMZ.

“First, I’m an artist,” she explains, as she is shown holding the horrid image of the mock-Trump severed head near her own.

This wasn’t art. Holding a bloody severed head of the president is not funny. It’s vile and violent.

This was so unfunny, the U.S. Secret Service has reportedly launched an investigation into the incident, according to the Washington Times.

“I sincerely apologize,” Griffin said in her video apology, also on TMZ.

So what is Kathy Griffin sincere about… the bloody severed head video, or the apology video? Because this isn’t her foray into offensive controversies.

Mediate reported in March about Griffin’s appearance on MSNBC’s Chris Matthews late night show reacting to President Trump‘s address to Congress. “She didn’t like having to ‘watch this idiot for an hour and nine minutes’ say ‘one hateful thing after another.’

She particularly remarked upon the “audacity” for Trump to make all sorts of promises on health care when there are people––many of whom support him––who’ll lose coverage if Obamacare is repealed.” 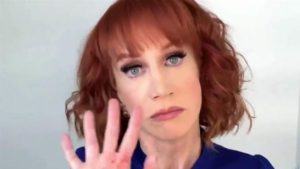 What a class act ‘resister’ Kathy Griffin is.

Kathy Griffin’s unapology for going so far beyond funny, or even decency was only made in response to the outrage of her video and photo.

Imagine for one moment if the bloody, decapitated head in her “comedy” video belonged to Barack Obama… let that sink in. Talking heads (no pun intended) across the country would call her a racist, and demand she be drawn and quartered after taking diversity training.

That Kathy Griffin thought Trump’s mock bloody decapitated head in a video was a funny idea exposes how dangerous the left really is. We are seeing leftist mobs of college kids all over the U.S. sucker-punching anyone who disagrees with them. “We have the left who thinks it is their God given right to suppress if not kill anyone who disagrees with them,” Martin Armstrong of Armstrong Economics wrote. “I for one am starting to lean for the break up of the United States and all the leftists please move to the left of the country and anyone else who wants freedom from these insane people, move to the right.”

“Tyranny is what these people preach. It is their way or no way.”

Kathy Griffin’s vile terrorist-style beheading video, in the language of terrorism, shows just how mentally ill the lunatic Left is. What Griffin did encourages more violence against Trump supporters and sends a message that violently physically harming political opponents is acceptable.

By any means necessary… the motto of the radical left, and BAMN, the official group supporting the violent Antifa thugs advocating violence must be thrilled with Griffin’s sick video.

I found no statement from Democratic National Committee Chairman Tom Perez about this vile act, or any other elected Democratic leader for that matter.

For the record, President Trump expressed his disgust of Griffin and her video of her holding up the bloody decapitated head of a Trump dummy: “Kathy Griffin should be ashamed of herself. My children, especially my 11-year-old son, Barron, are having a hard time with this. Sick!” Mr. Trump  tweeted.

Griffin has co-hosted CNN’s New Years Eve coverage since 2007, and was let go Wednesday by CNN. Meanwhile, most of the leftist media spent the day defending Griffin’s vile video and photo, showing no concern for Trump’s wife, young son, or adult children.