Clayton “Clay” John App is a 33 year old, 7 year veteran of the US Army who served two tours in Iraq during Operation Enduring Freedom. A soldier who returned home from the war with TBI (Traumatic Brain Injury) and PTSD (Post Traumatic Stress Disorder) and who now sits in the General Population of a Florida state prison serving an 18 month sentence for selling $200 of drugs to a confidential informant.  This wounded warrior is my cousin and this is Clay’s story. 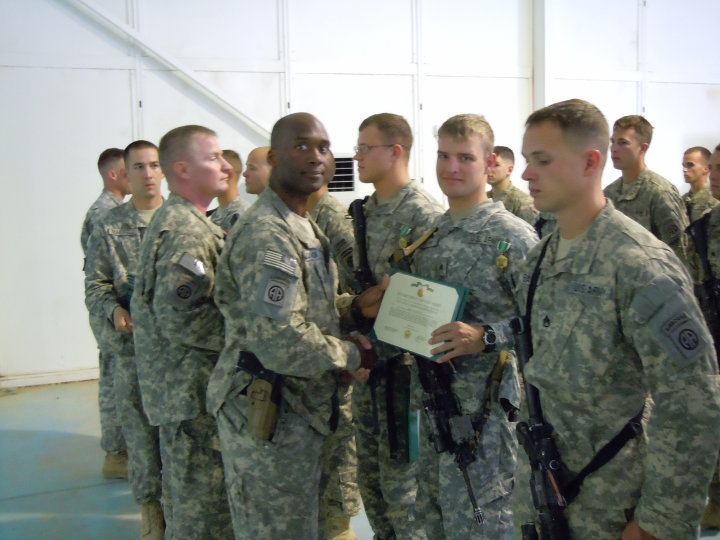 Clay was always a bright, beautiful child. Following in his grandfather’s military footsteps, he joined the Army in 2005. As a testament to his intelligence, Clay was offered Honor Guard three times, yet turned it down because “he wanted to go Airborne.”  Clay was part of the first surge in Iraq, deployed in January 2007, and sent to Sadr City, aka Hell on Earth. Hell on Earth was his home for the next 15 months.  He still cannot talk about the many horrors he was witness to, but finding the severed heads of children in boxes is one story that still haunts him.

By 2009, Clay rose to an E5, an unusual and exceptional rise in Army ranks, and was deployed to Iraq again in the summer of 2009.  For the next 13 months, Clay fought in the bloodiest and most dangerous battles. In March 2010, he returned home a changed, brain damaged, man. The daily explosions, gun battles, and atrocities of war, permanently damaged him. He was discharged from the Army in 2012.

In March 2012, Clay’s parents took him home to Trenton, FL and soon realized the extent of their son’s mental injuries: they now had a son who would pace all night for fear of going to sleep; a son who slept on the floor for a year; a son who still has night terrors.  During one of these night terrors, his father tried to wake him, only to find himself flat on his back on the floor after Clay threw him down and restrained him. When Clay “came to” and realized that he had just attacked his father, he broke down in tears.

Due to Clay’s injuries, he was unable to hold down a steady job. The VA in Gainesville, 30 minutes from his home, initially treated him with opiates (narcotic pain killers) and out-patient therapy. Clay, although suffering from short-term memory loss and other related TBI conditions, was expected to remember his many appointments. Clay could not tolerate the opiates and told me, “Megs, if you had told me someone shot my dog when I was on those things, I wouldn’t have shed a tear. I was just numb. I didn’t like the numbness.”

Without a job, Clay could not always afford the gas to get to the VA in Gainesville. Adding to his financial and mental woes, the VA has never paid him his TBI and PTSD disability benefits in 4 YEARS due to a “technical error.”

Because Clay could not tolerate the opiates, find a job, or receive his VA disability benefits, he sought the use and sale of small amounts of illicit drugs to self-medicate and make a little money. In April, 2014, Clay made an approximate $200 sale to a confidential informant in Trenton, FL.  This sale was a felony and the District Attorney Robert Willis, who champions himself to be “tough on crime and criminals,” created another Hell on Earth for Clay by fighting against Clay’s request for Veterans Treatment Court.

Clay plead and was released from Gilchrist county jail as a Confidential Informant on probation. Which leads me to my first question: why would the county choose a brain damaged veteran to be a CI?

Following his orders,  Clay made a buy for the county in January 2015 and walked in the buy to the Sheriff Robert D. Schultz. Yet, DA Robert Willis said that the buy was unsanctioned and charged Clay with felony possession which carried a 25 year prison sentence.  Due to Mr. Willis’  overly zealous prosecution, Clay was held for 4 months in Gilchrist County Jail, without access to his daily PTSD/TBI medication. A brain damaged Veteran was not given his prescribed medication for 4 months.  WHY?

During these four months, Clay was only allowed outside for 2 hours a week, and only on a Friday afternoon. However, many weeks would go by without any outside privileges.  Additionally, Gilchrist county charged Clay over $9,000 for this 4 month stay.  This debt to the county remains unpaid.

In August 2015,  I got involved.  As I researched my cousin’s case, I found that Florida is only one of 26 states to offer Veterans Treatment Court and pressed the public defender and the VA to work on Clay’s behalf for treatment instead of incarceration.  Clay also fought for treatment and rehabilitation and wrote this letter in November 2015 to Judge William Davis of the 8th circuit court:

On November 19th, 2015, Judge Davis ordered that Clay be transferred out of the criminal court system and into the Veterans Court System–a system that was purposefully created for injured veterans like Clay.  A treatment system which provides rehabilitative care, therapy and resources for the many veterans who return to society broken and traumatized. This verdict was an answer to our prayers. Little did we know, our fight for Clay was not over.

According to a source at the VA, DA Robert Willis did not like the verdict. According to another reliable source, Robert Willis doesn’t see Clay as an injured veteran, he sees Clay as a menace to society.  Perhaps this explains why it then took Gilchrist county 4 months to complete the necessary paperwork to transfer Clay out of the county and to a Veterans Treatment Center in a neighboring county?

In March of 2016, the Veterans Court paperwork was finally completed and Clay went to the county to sign the papers.  After Clay signed the paperwork, Gilchrist county charged him with a violation of probation and transferred him back to the county jail.  Please note that a veteran cannot be on probation to enter Veterans Treatment Court, so if Clay was on probation, why was the paperwork drafted in the first place?

Yet, the paper work for a new plea deal didn’t take 4 months for the county to draft! In just a few short days, DA Robert Willis offered another plea deal to have Clay sent to state prison on an 18 month sentence and further warned that if he didn’t sign the deal, the state would continue to add months to his prison sentence until Clay signed. Clay signed the deal on April 14th, with an expectation that he would be transferred to the medical ward of Lake Butler state prison and serve only 6 months pending good behavior.

In one of my daily, recorded conversations with Clay as he sat behind the bars of Gilchrist County jail, he said, “Megs, if I sign this deal, I will have 6 months to go outside everyday if I need to. I can get exercise.  If I don’t, I sit here and rot in Gilchrist County jail and the time behind prison walls just keeps adding up.  In the medical ward, I am away from the murderers and hard criminals.  I can get my medication every day. And when I get out, I can put Gilchrist County behind me and move to a place where I can start over and get some help. I know I need help. I have been asking for it, but the DA seems to have it out for me.”

Clay was transferred to Lake Butler state prison on April 19th.   The only information we can get from Lake Butler is that he is in general population–yet another Hell on Earth.  We were simply told that Lake Butler “doesn’t do prisoner classifications on Fridays,” a classification needed in order to transfer Clay to the medical ward.

Is Clay’s classification as a mentally injured and brain damaged veteran not enough for required medical attention or the classification needed for the prison’s medical ward?

To this day, Lake Butler could not confirm that Clay was getting his daily, prescribed medication that he desperately needs.  Furthermore, Clay’s medical records were never transferred from Gilchrist County Jail to Lake Butler. I can confirm that Clay had a mental breakdown in Lake Butler and that a doctor gave him some medication.  Yet, Clay still sits in General Population.

I know that Clay is not the first veteran to suffer the injustices of an overly zealous prosecutor, a corrupted and abusively incompetent VA, and the injuries sustained from the horrors of war.  Yet, without accountability, Clay will not be the last.

Clay may not have been an angel when he returned from two tours in Iraq, but the demons and injuries that he carries with him will only get worse in the walls of a cell in the general population of a state prison.  The system is trying to break an already broken man.

As a member of the media, it is my duty to expose the truth, and I will not rest until there is Justice for Clay.   I will talk to any reporter, news organization, or elected official about Clay’s case. Raised by military men–who all pledged to leave no man behind, I cannot and will not abandon Clay.

You can help Clay by sharing this story and by putting pressure on the  following elected officials:

You can also help Clay by making a small donation to the Justice For Clay campaign.  All proceeds will be used to help Clay pay off his “debt” to Gilchrist County and any proceeds that are raised over the $12,000 will help Clay have a financial cushion when he enters into a treatment program.

You may email me with any comments or questions at justiceforclayton@gmail.com.