“Nominating Donald Trump will wreck the Republican party as we know it.” 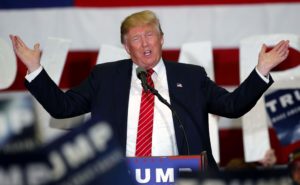 The Republican elite and media intelligencia are now blaming Donald Trump for either destroying the Republican Party, or killing its spirit.

Kotkin even claims “Trump has broken not only the (Republican) Party structure, but also its spirit.”

I beg to differ — it wasn’t Trump who broke the Party’s spirit. He’s just the guy bold enough to call them “Losers.”

How many times have Republican voters given elected Republicans in Congress the chance to fix what ails America? This isn’t the fault of voters or Donald Trump. The fault rests squarely with poor Party leadership, and greedy, power mongering electeds, who couldn’t wait to get as far away from constituents as a jet to DC could get them; where they could wheel and deal with the Wall Street and K Street power brokers and feather their nests.

This demise was self-inflicted by those elected to Congress, lobbyists, career consultants, donors, the DC establishment, and the formerly conservative media. They all have been jockeying for position in the DC hellhole where ‘mo money’ is never enough while feeding at the trough of power and pay checks.

And now, Jonah Goldberg, Rich Lowry, Charles Krauthammer, the entire Wall Street Journal staff, Fox News, Amanda Carpenter, Ben Shapiro and Erick Erickson, have shown that they are nothing more than payola-for play ‘pundits,’ bought off by the RNC cartel.

If they had shut up and done their jobs honestly and with integrity, America may or may not have flocked to Donald Trump. But with the media intelligencia and self-anointed Republican elite vomiting their disgust nightly on the cable news at Trump, they’ve practically campaigned for him.

“Those most responsible for the party’s decline, however, are those with the most to lose: the Wall Street-corporate wing of the party,” Kotkin says later in his column. “These affluent Republicans placed their bets initially on Jeb Bush, clear proof of their cluelessness about the grass roots – or much else about contemporary politics.” And he’s spot on.

After nearly eight years of Obama doubling the nations debt, diminishing and emasculating the military, while largely ignoring the rise of ISIS under his watch, America is on the brink of financial disaster, as well as mass destruction by radical Islamic terrorists – or other despotic regimes like North Korea.

But all the Republican elite and media intelligencia can talk about is Trump’s “crude persona, and equally crude politics,” his “brash personality,” or how he is “a Klan-loving racist.”