Madam, would you sleep with me for 5 million pounds?

My goodness, Mr. Churchill! Well, I suppose…we would have to discuss terms, of course.

Would you sleep with me for five pounds?

Mr. Churchill! What kind of woman do you think I am?!

Madam, we’ve already established that.  Now we are haggling price.

Politics is downstream from culture.

Jane or Sarah. Amy or Lena. Take your pick of the feminist “free the pus*y” champions who obsessively, continuously and shamelessly shove their pus*y in everyone’s face.  If they aren’t talking about their pus*y or flaunting their pus*y on social media or TV, they are using their pus*y for Hillary Clinton’s campaign and her progressive causes like  reproductive justice.

Amy Shumer proudly leads with her pus*y every chance she gets on “Inside Amy Shumer.”  She and her progressive parade of pus*y paparazzi openly advocate for mainstreaming the word pus*y in order to free the pus*y.  In fact, all liberated, feminist, Gen Y women need not be ashamed of openly sharing their pus*y in public or talking about their pus*y in public.  When Comedy Central bleeped Amy Shumer for using the word pus*y, but didn’t censor men for saying dick (when NOT referring to their genitalia), she and her producers cried “gender inequality” and the network assented.  “It was a great moment in US history” gushed her head writer and producer Jessi Klein. We’ve come along way, baby?

But, why stop celebrating inside Amy Shumer when you can be on the outside with another one of Hillary’s Vag Hags, Sarah Silverman.  If you’re a progressive woman who loves your vagina and abortion, you too could win Sara’s vagina napkin at an abortion fundraiser!

Hey! Don’t be a prude or a mysoginist, you sexist bastard! This activism isn’t demeaning or objectifying!  Women and men should be screaming VAGINA at the top of our lungs like Sarah Silverman and Conan O’brien on late night TV.  This is Feminism–hear their pus*ies roar!  ROAR like Katy Perry, another feminist Ready for Hillary–while naked and begging for votes.

I am unsure how much some feminist or emasculated male paid for Sara’s vag napkin, but have you met Amy Shumer’s pus*y, you patriarchal pigs? 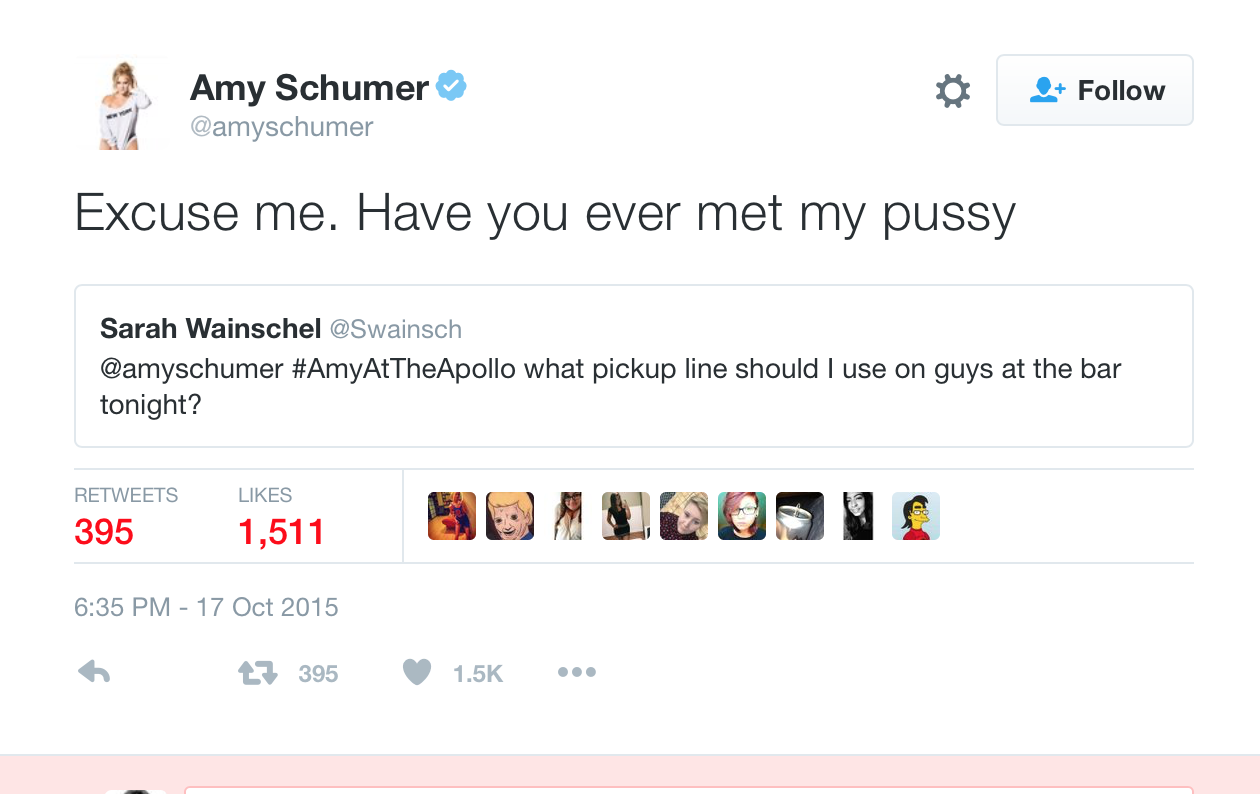 You just may have if you were in #everytown, because Amy took a vag selfie to promote her next favorite thing, gun control.  Annie don’t get your gun, Snapchat your vag! 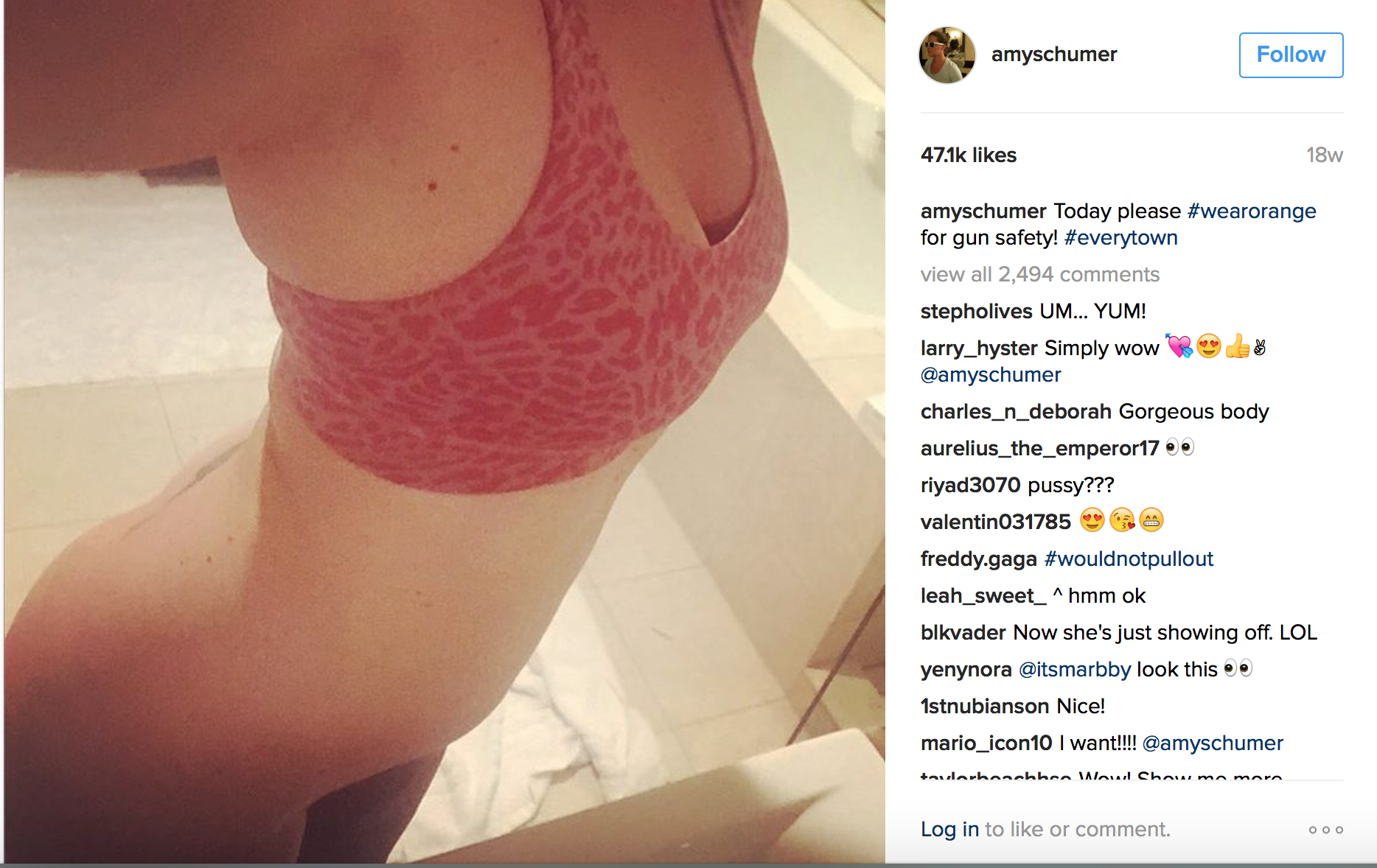 If Amy, or any one young and aspiring feminist, wants to perfect the vag selfie, this progressive clitoral shutterbug will tell you how here, but don’t you man pigs DARE send her a dick pick in the afternoon.  Wait until 11:30 pm because she has standards…or something. (Anthony Weiner, are you listening?)

Many millenials were too young or yet born when President Clinton sexually harassed and abused a young intern.  These social justice, Gen Y heroines now demand safe spaces from various triggers–like the word Trump written in chalk…or mid-afternoon dick pics. Many of them were too young to witness Hillary and Bill, publicly and privately,  attack the many Democrat women who dared to accuse Bill of sexual harassment, abuse, rape, and adultery. These survivors weren’t to be believed.  They were to be systematically destroyed. 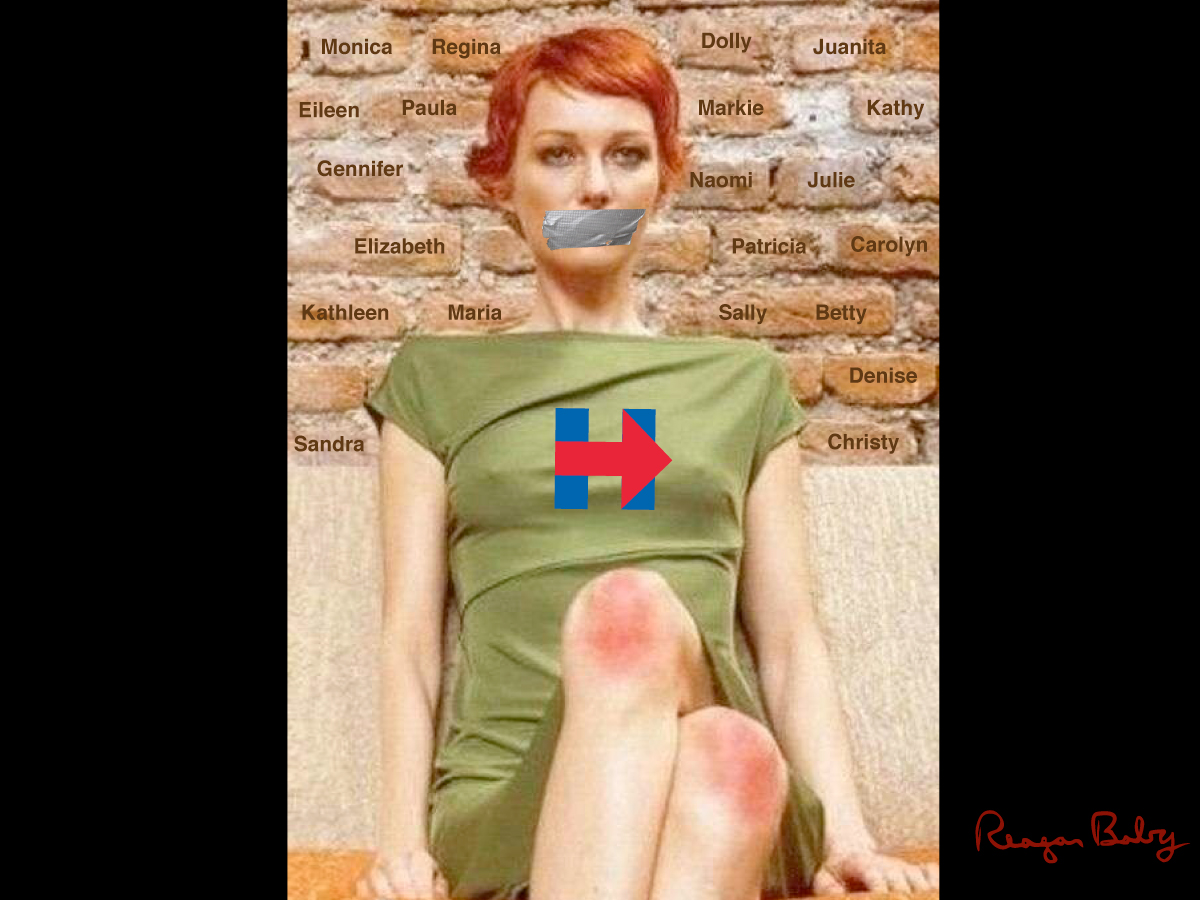 Millennials don’t share the love for Hillary like their celebrity sisters, but they fawn over proud, outspoken, self-proclaimed sluts like Amy Shumer and Sarah Silverman.  Young women are inundated with their graphic images and graphic language which sacrifice decency for vulgarity and monogamy for promiscuity. When picking up men at a bar, Amy tells them to lead with their pus*y. If young women are wondering why men treat them like sluts, on or off Tinder, wonder no more.  The same Gen Y rag that gave us tips and tricks on how to take the perfect vag selfie also lists the  fifteen reasons why Amy Shumer is Gen Y’s favorite feminist:

Amy isn’t afraid to show some leg or cleavage, or to talk about the sex positions she most enjoys. She even calls herself a “slut” proudly. Amy is making it socially acceptable for women to openly express their sexuality and to not be ashamed of having lots of sex.

Slut is no longer a derogatory term according to these Gen Y feminists.  Another feminist and Hillary Slut named Amber Rose started SlutWalk in 2015 in order to raise awareness for gender justice and equality.  The Gen X “Walk of Shame” has been replaced with the Gen Y “Slut Walk of No Shame.”  Where’s Amber now?  She’s twerking on “Dancing With the Stars” and throwing her #PussyPower behind Hillary Clinton.

These proud sluts tweet #Imwithher, yet Trump, or any man,  is a scumbag for taking advantage of women who are DTF?  WTF?

DTF–The Sex and the City Effect

And then in my sophomore year, I probably had sex with six guys, and I was like, Maybe I’m like Samantha in Sex and the City and I’ll just keep this train movin’ so that I don’t get attached to anybody.  Amy Shumer

The millennial author in an article entitled, “Did Sex and the City Spawn a generation of women who are DTF?” may have missed this quote from Amy Shumer, but she arrives at an astute and repugnant reality:

“Now, it seems like every show on Netflix, Showtime, and HBO are in a smutty competition to be the dirtiest. If listening to Charlotte York complain about blow jobs now seems adorably quaint, then it’s probably because we just saw an explicit display of anilingus on Girls.”

Lena Dunham is not only one of the 100 of  Time magazine’s Most Influential People, she is the Emmy nominated, Golden Globe winning, creator, writer and producer of Girls, who has not only mainstreamed anilingus and joked about sibling molestation, she is also one of the very few people who has interviewed Hillary Clinton.  Lena asked Hillary about young, impressionable women, and feminism:

I think the question on every Lenny reader’s lips is: Do you consider yourself a feminist?

Yes. Absolutely. I’m always a little bit puzzled when any woman, of whatever age but particularly a young woman, says something like, “Well, I believe in equal rights, but I’m not a feminist.” Well, a feminist is by definition someone who believes in equal rights! I’m hoping that people will not be afraid to say—that doesn’t mean you hate men. It doesn’t mean that you want to separate out the world so that you’re not part of ordinary life. That’s not what it means at all! It just means that we believe women have the same rights as men, politically, culturally, socially, economically. That’s what it means. And if you don’t believe that about yourself as a woman, please, go ask yourself: Why? What is holding you back? And it’s not going to be good for you as a woman to be denying the fact that you are entitled to equal rights. And so, yes, I’m a feminist, and I say it whenever I’m asked.

What is holding Megan Barth back from being a feminist? Self respect.

But is it Rape Rape?

Whoopee Goldberg defended the child rapist Roman Polanski by asking if the rape was “rape rape.”  Hillary also defended a child rapist.  Whoopee is a Hillary supporter.  Coincidence?  Bill Clinton defended his sexual abuse and harassment of Monica by publicly challenging the definition of “is.”  If Bill Clinton and Jeffrey Epstein were the two guys caught on a hot mic talking about pus*y, this nation, orchestrated by the propagandist pus*ies in the press, would plunge us into a national conversation about the definition of pus*y. Hillary would defend some pus*ies and punish some others in this tawdry tale of two pus*ies.

Bill Clinton is a billionaire rapist and Donald Trump is a billionaire who said the P word.  According to feminists, Donald Trump’s WORDS are the epitome of our Rape Culture, Bill Clinton is just Hillary’s husband and keep her pus*y out of it.  Trump may be no angel–just like another Hillary supporter, Alisa Machado.  But if these cultural “icons” who are Ready for Hillary are the role models for younger women, it is not Trump who owes women an apology. In fact, these feminists should just follow Bill’s advice to Juanita after he raped her: grab some ice and shut up.