My problem lies in reconciling my gross habits with my net income.

Due to the Puerto Rico’s gross habits, the commonwealth has amassed a total debt of over $72 billion and has already defaulted on $221 million of its’ debt.  When unfunded liabilities (pensions) are included, these additional costs bring the total value of their debt closer to $165 billion, approximately $150% of its’ GDP. 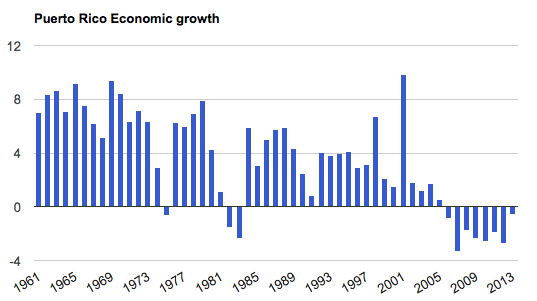 According to the NY Times,  “On May 1 the island’s all-important Government Development Bank must make debt payments of $422 million, which it does not seem to have. Two months later, about $2 billion is due from the central government and a number of big public enterprises: the electric power authority, the water and sewer authority and the highway authority, among others. Puerto Rico’s constitution effectively guarantees at least some of those payments, but the money to make them appears to have dried up.”

Currently, Puerto Rico’s debt is being debated on the floors of Congress and in front of the Supreme Court and the outcomes of these debates will have a significant impact on american tax payers, shareholders and existing US law.

The Gross Habits of the Commonwealth Are Not Uncommon

If you take a look at the US mainland, similar spending and debt problems exist in many  progressive counties and states, resulting in many municipalities to file for Chapter 9 bankruptcy protection.  This protection allows for these entities to restructure their debt to pay off their creditors.  Yet, the investors (bond holders) are the ones who receive very little, while the debtors (pensioners) remain fully funded. 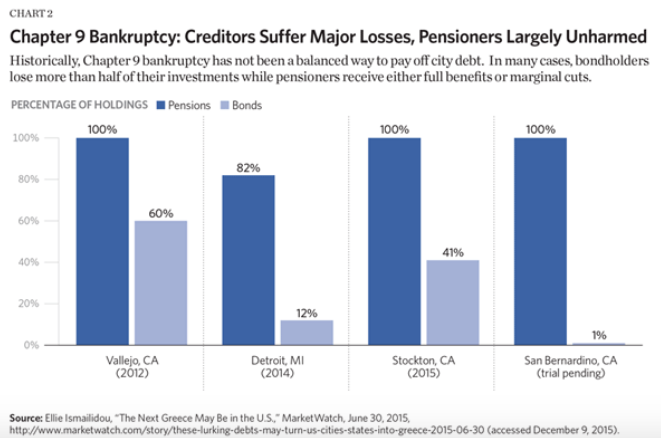 Since 1984, the territory of Puerto Rico is not allowed to enact Chapter 9. In 2014, and in response to their looming debt crisis, the island’s government enacted their own bankruptcy law designed for it’s big public utilities, but that attempt ran afoul of US Federal Law which states that only congress can enact bankruptcy laws. Additionally, Franklin Advisers and OppenheimerFunds, filed suit on the same day the law was enacted. They argued that “no matter how much Puerto Rico might want to take shelter from creditors, the bankruptcy code clearly said it could not file for Chapter 9 protection, nor could it enact its own bankruptcy law. The United States District Court in San Juan and the Court of Appeals for the First Circuit agreed.” The Supreme Court of the United States is hearing this appeal, and Justice Sotomayor, of Puerto Rican descent, reinterpreted the federal code and helped Puerto Rico argue their case.

Puerto Rican citizens do not pay federal income tax, but do contribute and and receive SS and Medicare benefits.  According to the Heritage Foundation, approximately 60 percent of their residents rely on government healthcare and a household of three receives 50 percent more of its’ income from welfare than from work.

Median household income is $19,000.  About 45% of Puerto Ricans live in poverty, versus a national average of 16%, according to the Treasury Department.  The Jones Act increases shipping costs on the territory’s businesses and consumers.  Small businesses complain that they are subject to US federal minimum wage laws that make it difficult for them to do business.  Moreover, these hikes in the minimum wage were sharply disruptive, according to a 1992 National Bureau of Economic Research analysis. They resulted in  “substantially reduced employment on the island” and mass migration of suddenly unemployable lower-skilled workers to the U.S. mainland.” Fight for 15 anyone?

As Peter Ferrara explains, “The root of the problem is Puerto Rico’s economy, which no longer reflects the island’s name. Only 40 percent of the adult population (3.2 million) is even in the workforce, with about a third working for the government. With 12.5% unemployment, the Island’s population is declining, down 5% in the last 5 years. Those leaving are the most productive professionals, taking their incomes and tax payments with them.”  Approximately 1,500 islanders leave for the mainland or other parts of the Caribbean each week.

Puerto Rico’s Governor, Alejandro Garcia Padilla, refuses to acknowledge that government spending, along with a raise in the minimum wage, has contributed to his billion dollar problems. He is demanding that the bondholders takes pennies on the $14 billion dollar bonds in return and that the US extend Chapter 9 laws to his territory.

In an interview with USA Today, Gov. Padilla stated: “There’s no more tricks. This is it. We’re doing everything we can to meet our (debts), but we need (bondholders) to do their part.”  Moreover, the governor ruled out the prospect of pensions cuts to stabilize the books.  “It’s a right already earned, so it will be unconstitutional if we try to reduce the payment that they are already receiving because they are already retired…without congressional action, Puerto Rico would be forced into drastic cuts to public safety services that will trigger a “humanitarian crisis.”

They say the road to hell is paved with good intentions, and the humanitarian crisis, to which Gov Padilla speaks, is very typical of a progressive liberal who continues to spend other people’s money, on behalf of the common good–without concern for a limited money supply, economic fluctuations, or debt obligations; thereby, creating a humanitarian crisis of dependency on government.

Puerto Rico and our American government should heed the words of Ronald Reagan: