A Feminine Manifesto by Megan Barth and Katy Grimes

Radical feminism is an oppressive and rather brutal ideology that has vast cultural implications. With a goal of control, radical feminism focuses on destroying traditional relationships using shaming, violence and misrepresentation of facts. And there is nothing feminine about radical feminism or feminists. Celebrating your birthday naked while on a toilet in a public restroom?  How lady like.

Today’s liberal women are destructive, antagonistic women, devoted to their own misery in undermining traditional institutions crucial for a healthy, dynamic society: marriage, motherhood, and fatherhood.

The history of lies told by repugnant liberal women has never been more evident than the 2016 Presidential election.

Even Michelle Obama’s claim that Donald Trump’s lewd comments from 2005 left her “shaken to the core” is dubious. Michelle has apparently forgotten Reverend Wright, from the pulpit of the Obamas’ church saying, “And Bill and Monica Lewinsky was riding dirty. Yeah, chickens have come home to roost, baby. Bill was riding dirty.”

Michelle Obama’s favorite role model for her daughters – Beyonce and Jay Z, rappers who make a living off singing about raping women, and graphic descriptions of sex. Jay Z “got Obama on text” and Beyonce has Michelle on speed dial. The First Lady is a self-described feminist.

The female Democratic nominee for President, Hillary Clinton, has been no friend to women who’ve crossed her or her abusive, philandering, womanizing husband. Her partners in the liberal media have done their best to cover up he many Clinton crimes, despite the severity and ramifications.

Many millenials were too young or yet born when President Clinton abused his power of the oval office to sexually harass, abuse, and publicly defame a young intern.   These social justice, Gen Y heroines now demand safe spaces from various triggers–like the word Trump written in chalk or a speech from a gay man by the name of Milo.  Many of them were too young to witness Hillary and Bill, publicly and privately,  attack the many Democrat women who dared to accuse Bill of sexual harassment, abuse, rape, and adultery. These survivors weren’t to be believed.  They were to be systematically destroyed.

Understanding liberals is easy: Their ideology is nothing more than what feels right to them, even in their anger and acrimony.

The left is wrongly credited with embodying compassion, when in reality the feeling that more accurately defines the left is envy. Feminists embody envy – not feminism.

Winston Churchill called socialism “the gospel of envy.”  Feminists are green with envy born out of their own deep-seated issues and insecurities. Whatever they wish for or cannot have, they will destroy it.

“We can’t destroy the inequities between men and women until we destroy marriage,” said Robin Morgan, radical feminist prominent in the 1960’s and 1970’s, and founder of the radical feminist group W.I.T.C.H. (acronym for Women’s International Terrorist Conspiracy from Hell).

Another radical feminist, Linda Gordon, once said, “The nuclear family must be destroyed… Whatever its’ ultimate meaning, the break-up of families now is an objectively revolutionary process.”  You know what else requires the destruction of the nuclear family?  Cultural Marxism aka Communism.

Radical feminists call for intrinsic social engineering to eliminate important and obvious differences between the sexes. They rely on “gender discrimination” and “sexism” when they fail to succeed.  The emasculation of men is their weapon of choice on their destructive road to their own “empowerment.”

If a woman loses to a man in an election, it’s because she’s female. If a woman doesn’t get a promotion, it’s the male fraternity oppressing her. If a man whistles at a woman on the street, he’s objectifying her. If a woman gets inconveniently pregnant, the only option available to her is an abortion.

Radical feminists have all but destroyed the family structure in America in their quest to marginalize men and boys. They’ve set their sites on the destruction of the Boy Scouts, male dominated sports, men in the military and college-aged men.  The expansion of Title IX under this administration has created a new generation of radical feminists who resort to falsely accusing college men of rape in a collegiate system that shuns due process for the accused. 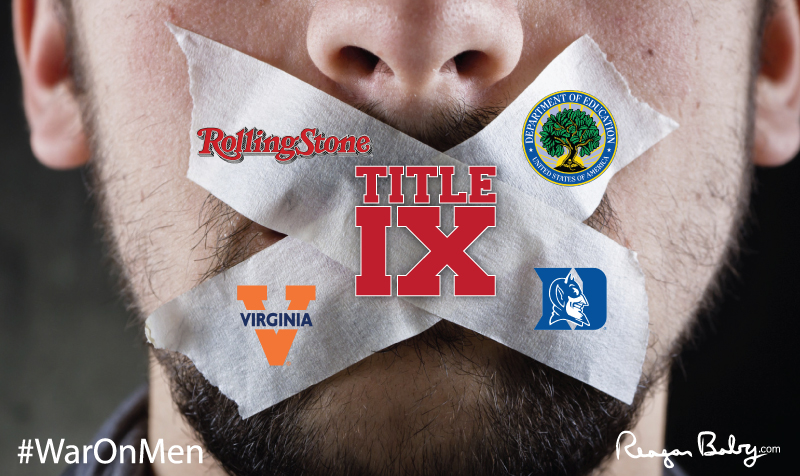 Radical feminists lie about wage discrimination and the “gender gap.”  In fact, the biggest disparity in pay can be found in the Clinton Foundation.  As Hillary proclaims to be the Champion of Women and promises to level the patriarchal playing field, the Clinton foundation paid their female executives, on average, forty percent less than their male counterparts and while Hillary’s tenor as Secretary of State, she paid her female staff thirty percent less than men.

Radical feminists glorify abortion on demand and children receiving birth control without parental approval. Radical feminists hold themselves out as the only group qualified to champion women’s independence, while systematically undercutting the family… which is explained by their views on marriage, as explained by Andrea Dworkin in “Letters From a War Zone:”

Marriage as an institution developed from rape as a practice. Rape, originally defined as abduction, became marriage by capture. Marriage meant the taking was to extend in time, to be not only use of but possession of, or ownership.

I believe that women have a capacity for understanding and compassion which man structurally does not have, does not have it because he cannot have it. He’s just incapable of it.

I feel that ‘man-hating’ is an honourable and viable political act, that the oppressed have a right to class-hatred against the class that is oppressing them.

Theses feminists are in their 70’s, but are still considered the leaders of the movement, and are well regarded and exalted within the feminist community. Their views are revered and used by feminists–whenever it suits their agenda.

Yet, the radical feminists of yesterday are no different than the Gen Y feminists of today who are tweeting “ImWithHer,” as they publicly advocate for Hillary Clinton.  Lena Dunham, Amy Shumer, and Sarah Silverman have made a living off of their “comedic talent” by bragging about their promiscuity and encouraging misandry and man shaming to their millennial feminists.

Millennials don’t share the love for Hillary like their celebrity sisters, but these militant female snowflakes fawn over proud, outspoken, self-proclaimed sluts like Amy Shumer and Sarah Silverman.  Young women are inundated with their graphic images and graphic language which sacrifice decency for vulgarity and monogamy for promiscuity. When picking up men at a bar, Amy tells them to lead with their….(the P word) that “shook Michelle Obama to the core.”  A millennial author of a GenY mag writes:   Fifteen reasons why Amy Schumer is Gen Y’s favorite feminist:

Amy isn’t afraid to show some leg or cleavage, or to talk about the sex positions she most enjoys. She even calls herself a “slut” proudly. Amy is making it socially acceptable for women to openly express their sexuality and to not be ashamed of having lots of sex.

If young women are wondering why men treat them like prostitutes, on or off Tinder, wonder no more.  This “sexual liberation and empowerment” of females has created a generation of men who are confused.  Men can’t objectify women with a compliment, let alone a whistle, but these ladies can objectify themselves in naked selfies, promote promiscuity, and encourage abortion as birth control.

Lena Dunham is one of the few people who was granted a one-on-one interview with Hillary Clinton.  Lena asked Hillary about young, impressionable women, and feminism:

“I think the question on every Lenny reader’s lips is: Do you consider yourself a feminist?”

Hillary: Yes. Absolutely. I’m always a little bit puzzled when any woman, of whatever age but particularly a young woman, says something like, “Well, I believe in equal rights, but I’m not a feminist.” Well, a feminist is by definition someone who believes in equal rights! I’m hoping that people will not be afraid to say—that doesn’t mean you hate men. It doesn’t mean that you want to separate out the world so that you’re not part of ordinary life. That’s not what it means at all! It just means that we believe women have the same rights as men, politically, culturally, socially, economically. That’s what it means. And if you don’t believe that about yourself as a woman, please, go ask yourself: Why? What is holding you back? And it’s not going to be good for you as a woman to be denying the fact that you are entitled to equal rights. And so, yes, I’m a feminist, and I say it whenever I’m asked.

What is holding Megan Barth and Katy Grimes back from being feminists? The love of men and a healthy upbringing of self respect.

Most women don’t want the things feminists are fighting for because their agenda is not pro-female; it’s anti-male. Most women would not want their daughters to emulate Hillary’s heroines who have sacrificed dignity and respect on the alter of Feminism.

Megan Barth is the founder and proprietor of ReaganBabe.com, a nationally recognized political commentator and woman’s advocate.  She has appeared on NewsMax TV, One America News Network, CNN Headline News, RT TV, America Trends with Dr. Gina, The Blaze, and has regular weekly appearances on a variety of nationally syndicated and regional radio shows.

Katy Grimes is an investigative journalist, Senior Correspondent with the Flash Report, and Senior Media Fellow with Energy and Environmental Institute. A longtime political analyst, she has written for The Sacramento Union, The Washington Examiner, Watchdog.org, The Pacific Research Institute’s CalWatchdog, The San Francisco Examiner, The Business Journal, E&E Legal, The Sacramento Bee, Canada Free Press, and LifeZette, and can be heard regularly on many talk radio shows each week.