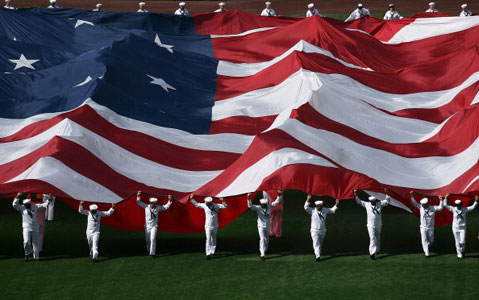 “Those who deny freedom to others deserve it not for themselves.” ~ Abraham Lincoln, 16th U.S. President

America’s second President and drafter of the Declaration of Independence, Thomas Jefferson warned, “The course of history shows that as a government grows, liberty decreases.”

The purpose of liberty is to allow human life to flourish. While the rest of the country embraced the chance to regain freedom and liberty by electing Donald Trump President, in California, the state government has exponentially grown, causing the Golden State to no longer flourish – and liberty is decreasing.

Reflecting upon Independence Day, it’s so important to remember the American Revolution wasn’t just a rebellion against the King of England, it was a rebellion against being ruled by a monarchy. Our forefathers and many of our ancestors gave up everything and shed their own blood rather than submit unto King George lll.

However, in California, we find ourselves with our own King George lll – Gov. Jerry “Moonbeam” Brown. The magical California job creation engine has shifted from a healthy manufacturing economy, to a service economy—from high-paying jobs with benefits and growth potential, to low-wage, nowhere minimum wage jobs, creating a permanent poverty class. And remember, we Californians who disavow Brown’s Democratic Socialist utopia are “troglodytes” and “deniers.”

Yet California’s selfish liberals claim it’s the rest of America that is the problem. Joe Mathews wrote this screed Monday about America at Fox & Hounds:

But you and I(America) have been drifting apart. Today, I look at you and feel like I’m an entirely different place, with different values, even different realities. And I find myself wondering: Do you and I have a future together?

I’ll be blunt—the problem is not me. It’s you.

Leftists Brown and his fellow travelers in the California Democrat Party, have legislated the highest gas, sales, and income taxes, yet the state rates dead last in roads and highways, on school performance tests, we have one-sixth of America’s welfare recipients, as well as the one-third of the country’s poverty.

Message to Joe: The problem is you and leftists.

Re-reading the Declaration of Independence, the nation’s most cherished symbol of liberty, helps refresh our ties to American history. Thomas Jefferson drafted it, and his words still capture the heartfelt convictions of liberty-loving Americans. Jefferson rightly focused on the importance of individual liberty, ideals first shared by John Locke and the Continental philosophers.

“Prudence … will dictate that Governments long established should not be changed for light and transient causes; and accordingly all experience hath shewn that mankind are more disposed to suffer, while evils are sufferable than to right themselves by abolishing the forms to which they are accustomed. But when a long train of abuses and usurpations, pursuing invariably the same Object evinces a design to reduce them under absolute Despotism, it is their right, it is their duty, to throw off such Government, and to provide new Guards for their future security.” ~ THOMAS JEFFERSON, Declaration of Independence

It’s as if Jefferson and Locke are living in 21st Century California.

“In short, herein seems to lie the difference between idiots and madmen, that madmen put wrong ideas together, and so make wrong propositions, but argue and reason right from them: but idiots make very few or no propositions, and reason scarce at all.” ~ John Locke

Joe Mathews continued, discussing the California initiative to ‘Brexit’ the U.S., which takes “inseparable” out of the California constitution’s line about California being part of the United States:

“America, whatever” is its attitude; “California first,” is its policy. The initiative sets up a structure with the express purpose of “buffering Californians” and their values “against chaos, dysfunction, and uncertainty at the federal level. While you slide toward republican authoritarianism, the initiative proposes that California—a place where the people who get the most votes actually win the elections—will stick up for democracy. We will fight for the right of adult citizens to vote and will challenge attacks on our immigrants, our world-class cities, and our anti-smog policies.”

Our friend, liberal Joe, needs to step out of Southern California occasionally, visit a few of the beautiful “fly over” states, and freshen up on his national identity. America is a beautiful place, populated with liberty-loving Americans who are fighting every day to make sure America does not turn into California.

Margaret Thatcher also summed this up rather eloquently:

“The choice facing the nation is between two totally different ways of life. And what a prize we have to fight for: no less than the chance to banish from our land the dark, divisive clouds of Marxist socialism and bring together men and women from all walks of life who share a belief in freedom.”

Thatcher and Ronald Reagan had a close friendship over their love of liberty:

“Freedom is never more than one generation away from extinction. We didn’t pass it to our children in the bloodstream. It must be fought for, protected, and handed on for them to do the same.” ~Ronald Reagan

And on California’s demise, we should heed Thatcher’s warning:

“Socialism’s results have ranged between the merely shabby and the truly catastrophic – poverty, strife, oppression and, on the killing fields of communism, the deaths this century of perhaps 100 million people. Against that doctrine was set a contrary, conservative belief in a law-governed liberty. It was this view which triumphed with the crumbling of the Berlin Wall. Since then, the Left has sought rehabilitation by distancing itself from its past.” ~ Margaret Thatcher

As the Iron Curtain was taken down, many people joked, “Marxism is dead everywhere – except American universities.” Today we can add the California Legislature to this “joke,” as elected lawmakers in the California Capitol actually voted and passed a bill to allow Communists to work in state government.

Californians, as well as many Americans, reviled in horror at Assembly Bill 22, now sitting on the shelf in a Senate Committee. And Democrats were shocked at the reaction.

“Socialists cry “Power to the people”, and raise the clenched fist as they say it. We all know what they really mean—power over people, power to the State.” ~ Margaret Thatcher

While decent Americans were repulsed by the pro-Communist California bill, many are not aware of just how radical the California Legislature, and fanatical Gov. Jerry Brown are, or the trend of militant Marxist, Socialist, Jesuit, Liberation Theology, Latino activism on the increase in California.

The goal of these extremists in California is to destabilize the state, and eventually the country to such a crisis, a revolution and reorganization is the answer. That is what Communists do. Modern day “Progressives” as they like to be called, like Brown, Senate and Assembly leaders Kevin de Leon and Anthony Rendon, and California Attorney General Xavier Becerra, refer to themselves as Multiculturalists and Progressives. But as history very clearly demonstrates, using Marxism as the cure to anything in society is a very dark fairytale, and one our founders consistently warned of.

“The tree of liberty must be refreshed from time to time with the blood of patriots & tyrants. It is it’s natural manure.” ~ Thomas Jefferson

Reagan always saw the greatness and goodness in Americans, and stressed this in many of his speeches:

“I want you to know that this administration is motivated by a political philosophy that sees the greatness of America in you, her people, and in your families, churches, neighborhoods, communities — the institutions that foster and nourish values like concern for others and respect for the rule of law under God.” ~ Reagan’s ‘Evil Empire’ Speech

Apparently Joe Matthews has forgotten this, while he enjoys the beautiful weather in Southern California:

Yes, I’m going my own way. But my people are just as American as yours, and so on July 4, I’ll still host many millions of barbecues, and enough patriotic parades and fireworks displays for 39.5 million of your citizens. Back east of the Sierra, I hope your celebrations are bigger and louder than ever, and that your people will stand extra close to the fireworks.

Maybe all the explosions will wake you the hell up.

It is going to be very interesting watching how Trump and his administration deal with California going forward.

In his February Joint Address to Congress, Trump referenced the 250th anniversary of the signing of the Declaration of Independence:

“In nine years, the United States will celebrate the 250th anniversary of our founding — 250 years since the day we declared our independence.  It will be one of the great milestones in the history of the world.  But what will America look like as we reach our 250th year?  What kind of country will we leave for our children?

Imagine the wonders our country could know in America’s 250th year.

Think of the marvels we can achieve if we simply set free the dreams of our people. Cures to illnesses that have always plagued us are not too much to hope. American footprints on distant worlds are not too big a dream. Millions lifted from welfare to work is not too much to expect. And streets where mothers are safe from fear – schools where children learn in peace – and jobs where Americans prosper and grow — are not too much to ask.

When we have all of this, we will have made America greater than ever before. For all Americans.”

So Joe Matthews, be warned: It is the Left that’s the threat to freedom and democracy, because despite their tantrums and protests, they don’t really believe in either.

As for the enemies of freedom, those who are potential adversaries, they will be reminded that peace is the highest aspiration of the American people. We will negotiate for it, sacrifice for it; we will not surrender for it, now or ever.” ~ Ronald Reagan