Never attempt to win by force what you can win by deception.

On November 27th, in response to the shootings in Colorado Springs– before the bodies were even cold, before any facts were made public, Hillary Clinton took to Twitter to #StandWithPP.  Do not bother looking for her tweets supporting the victims and their families because they simply do not exist.

As the news broke on November 27th, CNN reported:

What we don’t know is how or why it started.

According to the police dispatch tapes, Robert Lewis Dear holed himself up in a Planned Parenthood facility for hours, shooting at people outside of the facility.
On November 28th, President Obama, without knowing any of the facts, called for stricter gun control laws and the headlines read that his administration is “piecing together gun legislation.”  Zero calls for stricter gun laws following the attack on The Family Research Council by Floyd Corkins II, a gay activist, who planned a massive attack on the FRC headquarters while carrying 15 Chick Fil A sandwiches and 100 rounds of ammunition.  Zero calls for stricter immigration laws, or gun laws, following the murder of Kate Steinle by an illegal felon.
Also on that day, again, without knowing any of the facts, the Attorney General of the United States, Loretta Lynch, declared that “the Colorado shooting was a crime against women receiving healthcare services at Planned Parenthood.”
In unison, Bernie Sanders tweeted his support for Planned Parenthood and warned: 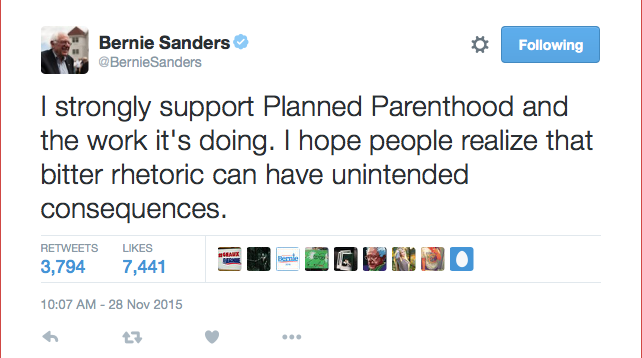 A powerful green light was now given to the Progressive vultures, and the mainstream media, and the deceptive “Attack on Planned Parenthood” was born:

What we do know is that Robert Lewis Dear was a deranged loner, yet the press, and Hillary, hides in the horror of his heart, rather than expose it.  Just as she and her progressive ilk choose to avoid, deny or obfuscate the horrors of late term abortions and the harvesting and sale of baby parts. There are unsubstantiated claims that Robert Dear mumbled “no more baby parts,” but unsubstantiated claims, like “Hands Up Don’t Shoot” make for effective, and violent, progressive political action, while other unsubstantiated claims are ignored.
We also know that Robert Lewis Dear identified himself as a woman.   Is Hillary protecting Robert’s reproductive freedom? For the continued manipulation of the truth is his protection. Hillary, the Administration, and their water-carriers in the Press, are protecting this deranged woman and defiling the memories of the fallen.  There weren’t any victims in the Planned Parenthood building or from Planned Parenthood, and we are unsure where the shooting started, yet Planned Parenthood is the victim.
On the afternoon of November 30th, Judge Stephen J Sietta announced that all records related to Robert Lewis Dear would be sealed. Therefore the truth will remain unknown until the trial is over or a new order is filed. But sealing the truth doesn’t stop Hillary, as the multiple scandals related to her family have historically shown.  For on that very evening, Hillary exclaimed:
“We should be supporting Planned Parenthood, not attacking it.  It is way past time to protect women’s health and respect women’s rights, not use them as political footballs.”
Hillary and her husband has been using women as political footballs for years.
Yet, Bernie makes a good point about bitter rhetoric, although the rhetoric of his progressive colleagues have a bitter history:

Now, extreme views about women, we expect that from some of the terrorist groups, we expect that from people who don’t want to live in the modern world, but it’s a little hard to take from Republicans who want to be the president of the United States. Hillary Clinton, Cleveland, 2015.
If they bring a knife to the fight, we bring a gun. Barack Obama, Philadelphia, 2008

The Truth is an anathema to progressives and, seemingly, the Press.  All Americans are the victims of this collective deceit.  The insanity of the perpetrator, and his defenders, is a war on sanity.