One of the great mistakes is to judge policies and programs by their intentions rather than their results.

The story of the 340B discount drug program is a classic example of a government program that has been hijacked.

Established by the Veterans Healthcare Act of 1992, 340B was intended to give veterans and the indigent discounted drugs.  Pharmaceutical companies could sell through to government veterans programs but had to offer a small amount of drugs at costs to help poor and indigent vets. According to the program’s requirements, covered entities must not resell or otherwise transfer 340B drugs to ineligible patients.

Thanks to Obamacare, the relatively small program has morphed into a crony scheme benefiting a variety of corporations, pharmacies, hospitals, clinics and even Wall Street investors. They have hijacked this program for their own financial windfalls, at the expense of the indigent, the veterans, and even the taxpayers.

According to Red State:

Once ObamaCare became law, the number of facilities participating in the program rose from 14,000 to 20,000.  Hospitals and other health care facilities realized they could take in the drugs at the discounted rate and then could turn around and bill Medicare and private insurance companies for the full cost of the drugs.  The difference would be banked as profit.  And profitable it is.

Duke University Hospital purchased $66 million worth of drugs through the discount program, saving $48 million. It then sold the drugs to patients for $136 million, making a profit off the backs of the taxpayers of $70 million.

Healthcare Corporation of America sold $1 million in bonds to finance marketing of its 340B software program.Now the pharmacies are getting into the act.  The number of single pharmacies operating as a 340B contract pharmacy has grown by 770 percent, from 3,785 pharmacies participating in 2010 to 30,046 in 2013.

At Duke University Hospital, for example, about 67 percent of patients who received those discount drugs were covered by commercial insurance companies, which often pay hospitals many times over cost for medications. Only 5 percent of the Duke patients were uninsured.  It appears that the hospital was gaining drugs at a discount only to bill insurance companies and public assistance programs for the full cost of the drugs, pocketing the difference.

A 2011 report by the Government Accountability Office (GAO) said that federal oversight of the program was insufficient to ensure that hospitals and drug companies were adhering to the rules. In 2012, the Health Resources and Services Administration (HRSA)  audited 51 hospitals.  These audits were the first of their kind since the program had been established in 1992. The HRSA also made all hospitals recertify themselves as eligible for the program.  As a result, some 271 treatment sites belonging to 85 hospitals were ejected from the program.

These findings have prompted lawmakers, like Senator Charles Grassley, to demand additional review. oversight and transparency, and states in a letter to the HRSA:

If ‘nonprofit’ hospitals are essentially profiting from the 340B program without passing those savings to its patients, then the 340B program is not functioning as intended…these numbers paint a very stark picture of how hospitals are reaping sizeable 340B discounts on drugs and then turning around and up-selling them to fully insured patients in order to maximize their spread.

Not surprisingly, the growth of the program has spawned a lobbying campaign of business interests designed to keep it.  The 340B coalition, comprised of the many aforementioned grafters, is pushing to keep the gravy train going and further expand the program. Yet, they just released a study confirming that upwards of 30% of of their hospitals are not using the money gained from 340B profits for the very purpose for which the program was designed.  As this chart shows, 340b purchases have spiked, while charity care remains flat: 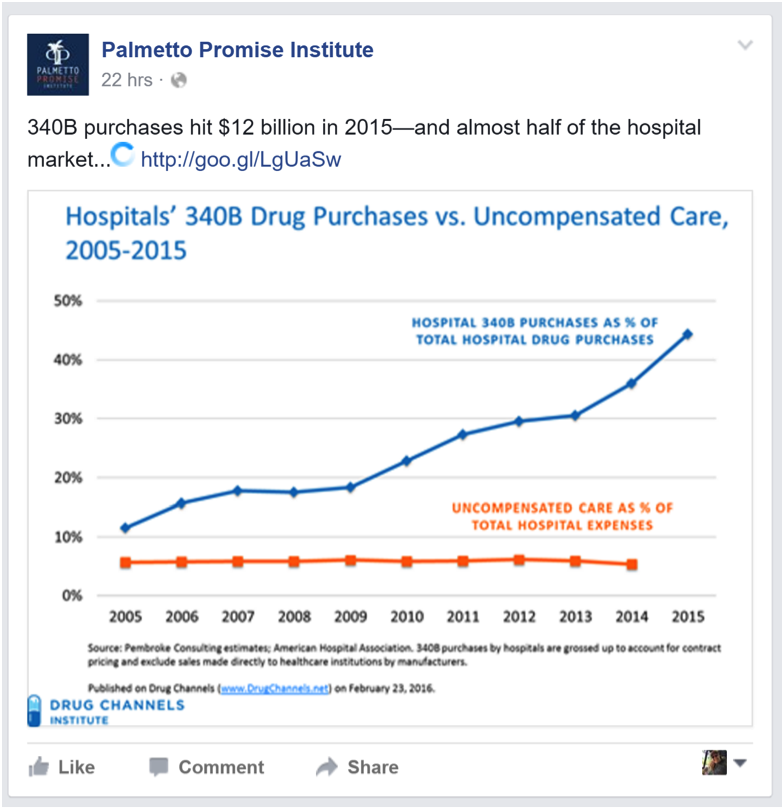 The perversion of this 1992 law is exceedingly evident and the benefactors of this law are not the veterans or the indigent. The increase in 340b enrollment is not due to a massive spike in the indigent or uninsured.  The massive increase in enrollment is due to the tens of millions of dollars that hospitals and pharmacies can make and will continue to make should these opportunists go unwatched and unabated.  If 30% of the of the 340B coalition admits to defrauding the 340b program, it is abundantly clear that the program is being abused and must return to its’ original intent.