Everyone who knows Jeffrey Epstein, knows about Air Fuck One. That was the nickname given to Epstein’s 727 when Bill Clinton would fly with him to Little St. James…because Jeffrey would hire at least two or three hookers on the flight to take care of them.

When this anonymous revelation was dropped in my lap, I had to start a bit of digging on Jeffrey Epstein and Bill Clinton.  Lo’ and behold, on October 25, 2007,  New York Magazine’s, Vanessa Grigoriadis wrote a piece entitled “Billionaires are Free:”

“To be a billionaire is to be radically free. You are your own galaxy. You make your own rules, hang out with the former president, send tourists to space. Billionaire investor Jeffrey Epstein, who lives in the largest dwelling in Manhattan, a 51,000-square-foot palace on 71st Street—though his business, naturally, is located on a 70-acre private island in the Virgin Islands—was humiliated this summer when his lifestyle was made public.

Epstein was known to be a womanizer: He usually travels with three women, who are “strictly not of our class, darling,” says a friend. They serve his guests dinner on his private 727, and are also there for touching.”

Are we to assume, based on Bill Clinton’s past and alleged crimes against women, that these young women were not commissioned for the multiple trips Clinton and Epstein took, over a 3 year period, to Little St. James?

“Not of our class, darling.” Perhaps this would explain the ruthless attacks on Bill Clinton’s victims by the elites– the Clintons, the press, and those in the Clintons’ inner power circle.

Monica Lewinsky was accused of being a narcissistic loony toon by Hillary Clinton.

Gennifer Flowers, Kathleen Willey, Dolly Kyle Browning and Juanita Broaddrick were labeled as liars, accused of being a part of the “Bimbo eruptions” and deliberately marginalized and targeted by the Clinton smear campaign–a campaign led and managed by Hillary Clinton.

In 1993, during the height of these scandals, Sidney Blumenthal, Hillary Clinton’s closest confidante, writes in the New Yorker:

Humiliating one’s prey, not merely defeating one’s foes, is central to the process of political success.

Bill Clinton’s prey must be humiliated to ensure the Clintons’ political success and power.

This week, New York Magazine, once again, exposes the dark side of money, success and celebrity.  I am No Longer Afraid profiles thirty five (out of 46) women who have found the courage to publicly speak out against another alleged rapist, Bill Cosby. These 35 women are featured on the cover: 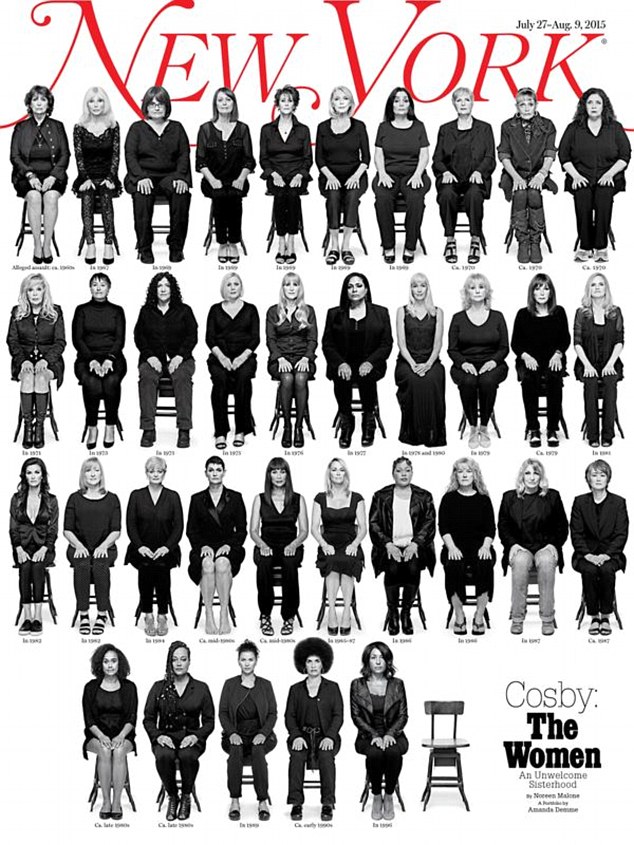 The 36th chair remains empty, reserved for another Jane Doe to come forward. How many more chairs they will need remains to be seen.

New York Magazine should be applauded and commended for giving these victims a much-needed refuge and a unified voice.  Initially, when some of these women came forward, they were met “with skepticism, threats, and attacks on their character.”
Sound familiar?
In light of the Bill Cosby scandal, Kathleen Willey launched her own website to provide a safe place for any other victims of Bill Clinton to anonymously come forward.  Will the press take any new allegations against the first black president seriously, or only allegations made against a black comedian?  Linda Tripp just came forward and called Hillary Clinton a liar and warns voters/women of her contempt for the public.

Camille Paglia, an outspoken feminist and author, provides this interview to Salon whereby she claims: “Right from the start, when the Bill Cosby scandal surfaced, I knew it was not going to bode well for Hillary’s campaign, because young women today have a much lower threshold for tolerance of these matters….

The horrible truth is that the feminist establishment in the U.S., led by Gloria Steinem, did in fact apply a double standard to Bill Clinton’s behavior because he was a Democrat. The Democratic president and administration supported abortion rights, and therefore it didn’t matter what his personal behavior was.

Gloria Steinam was one of many feminists to give Bill Clinton a pass and a free grope.  Nina Burleigh, a former White House correspondent and feminist journalist is another, who said in 1998:

Perhaps Nina and Gloria can lend their progressive kneepads to their feminists comrades as they line up in support of Hillary for President.  The potential “First ,” Bill Clinton, and Air F$ck One, will be making an encore.