“In East Orange, initiations were completed by murdering someone, for no other reason than to prove to a tremendously cold, tremendously tight brotherhood that you possessed the hardness required to watch their backs.”
― Jeff Hobbs 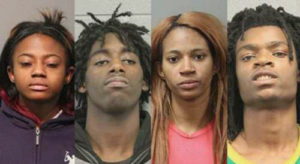 Johnson said they had to determine whether or not the kidnapping was “stupid ranting and raving,” by dumb kids, or “just stupidity,” and added, “we don’t have anything concrete to point (toward a hate crime).”

The FBI’s definition of “Domestic terrorism” as activities with the following three characteristics, should be applied to gangs in America:

These shootings and murders are the work of gangs. Chicago police acknowledge that street violence is always gang related, and of that, most of it is narcotics gang related. Many blame the high homicide rate on Mayor Rahm Emanuel’s harsh gun control policies because law-abiding citizens cannot legally protect themselves.

“In the first five months of 2016, someone was shot every two and a half hours and someone murdered every 14 hours,” LawOfficer.com reported. “Chicago mayor Rahm Emanuel warned in October 2015 that officers were going “fetal,” as shootings in the city skyrocketed. But 2016 has brought an even sharper reduction in proactive enforcement.”

“Devastating failures in Chicago’s leadership after a horrific police shooting and an ill-considered pact between the American Civil Liberties Union and the police are driving that reduction,” LawOfficer.com reported. “Residents of Chicago’s high-crime areas are paying the price.”

In the summer of 2015, wolf packs of teens marauded down Michigan Avenue’s Magnificent Mile, robbing stores and pedestrians. The phenomenon started even earlier this year. A couple strolling on Lake Shore Drive downtown on Memorial Day weekend were chased by more than a half-dozen young men, at least one armed with a gun. The two tried to escape across the highway, the teens in hot pursuit. A pickup truck hit the couple, killing the female. A police officer flashed his emergency lights at the teens, and they fled. “

Memorial Day weekend 2016, 69 people were shot in Chicago. Over the Fourth of July weekend, there were 42 shootings, where four people were killed and 46 were injured, according to Chicago police. In August alone, there were 90 homicides.

And incompetent officials like Chicago Mayor Rahm Emanuel and his Police Superintendent Eddie Johnson claim, the problem is too many guns: “We have too many guns in the streets of Chicago and too many people willing to use them,” Johnson said.

Chicago’s WBEZ News reported the city has at least 59 gangs with 625 factions, which span all over the West and South sides of Chicago.

Behind much of the undermining of the Chicago police is the ACLU of Illinois, which accused the Chicago Police Department in 2015 of engaging in racially biased stops, because its stop rate did not match population ratios. “Blacks were 72 percent of all stop subjects during a four-month period in 2014, reported the ACLU, whereas whites were 9 percent of all stop subjects. But blacks and whites each make up roughly 32 percent of the city’s populace. Ergo, the police are racially profiling,” Heather Mac Donald reported in City Journal.

Then–police superintendent Garry McCarthy and the city’s corporation counsel signed an agreement in August 2015 allowing the ACLU to review all future stops made by the department.

Today Chicago police officers are required to fill out new two-page forms for each “investigatory stop” they make, and complete 70 fields of information, including three narrative sections, all developed to meet ACLU demands, MacDonald reported

The California State Auditor reported in 2015 the statewide gang database is an inaccurate error-ridden disaster, as well as grossly out of date. The gang database is “maintained by law enforcement agencies, with oversight by an executive board and advisory committee made up of local law enforcement officials with no statutory authority,” the Los Angeles Times reported. Naturally, the ACLU requested the database be scrapped. The State Auditor recommended that CalGang be overhauled with a new oversight structure, administered by the state Department of Justice.

Fueled by the Black Lives Matter narrative, that all cops are racist and looking to kill black men and boys, has made the street dynamic much worse, and is behind overreactions by cops, as well as under-reactions.

It’s also interesting to note, States with the largest increases in gun ownership also have the largest drops in violent crimes, says John R. Lott, Jr., author of More Guns, Less Crime, now in its third edition, with updated statistics from the last 10 years, including detailed analysis of the effects of gun bans in Chicago and Washington, D.C. Lott proves that States with the most restrictive gun laws also have the highest murder rates, while states with much less restrictive laws, and those which allow open carry, have far fewer murder rates.

MacDonald points out that the “ACLU straitjacket” on police has not only depressed morale, there is a growing resistance of lawful authority.
These inner-city hellholes are a direct result of leftist rule, and children and innocents are dying because of it. The federal government must start treating gang violence as Domestic Terrorism in order to save our children.