Elon Musk has hit back at claims that President Donald Trumps new NASA bill will be good for his space exploration business, saying it does nothing to get SpaceX’s mission to Mars off the ground.  Musk also claims the new funding will not provide a boost to his aims of making commercial travel to Mars a reality for the public.

The S.442 funding bill, signed by President Trump, is the first of its kind to pass through Congress in six years and will help facilitate NASA’s deep space exploration projects and promote private-public partnerships, job creation, “achieving human exploration of Mars and beyond.” and legally commits NASA to draft plans that could get a “crewed mission to Mars in the 2030s.”

The subsidized, serial entrepreneur took to Twitter to respond to Kara Swisher, co-founder of technology news website Recode, who said the president’s decision to grant NASA $19.5 billion in funding would leave Musk “smiling.”

“I am not,” wrote Musk, chief executive of SpaceX. “This bill changes almost nothing about what NASA is doing. Existing programs stay in place and there is no added funding for Mars…perhaps there will be some future bill that makes a difference for Mars, but this is not it,” Musk added. 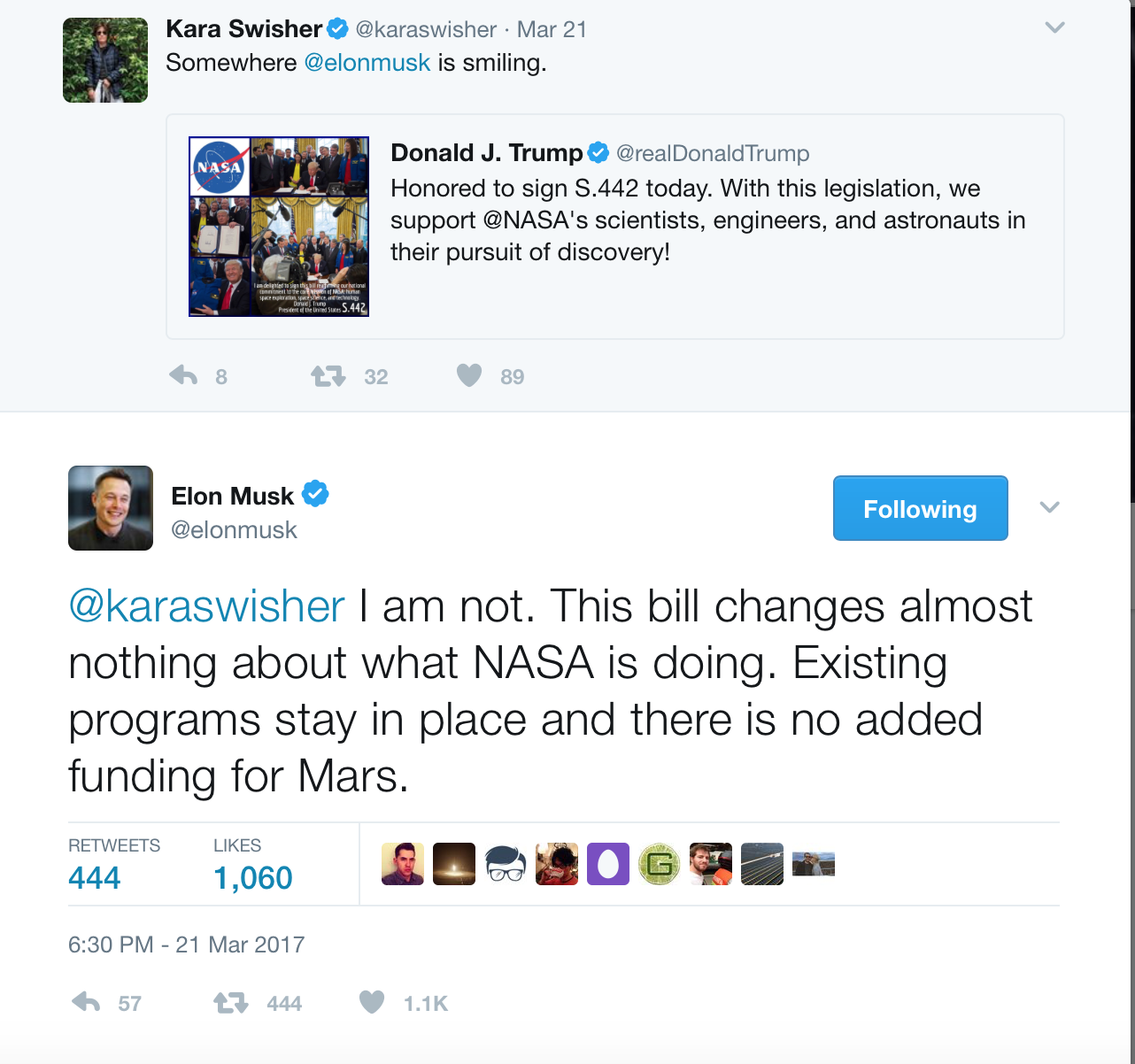 Musk has big plans for Mars. His goal is to send 1 million people to Mars and establish a permanent colony.  He has laid out a strategy to build giant spaceships to take 100 settlers at a time to Red Planet outposts within 10 years.  The cost for a one-way ticket per passenger is $200,000–with hopes to reduce the cost to less than $100,000 per passenger. Musk expects to spend the bulk of his personal fortune, currently valued at $13.4 billion, on this effort. He envisions other organizations eventually aiding SpaceX in Mars colonization as well, saying the effort will be a “huge public-private partnership.”

SpaceX is currently working in collaboration with NASA under a $1.6 billion contract, which has so far flown 10 cargo missions to the International Space Station.  Additionally, SpaceX and NASA think they have found a suitable landing site for the company’s first mission to Mars in 2020.

According to the LA Times, Elon Musk’s portfolio of companies has benefited in $4.9 billion in government subsidies.  The figure compiled by The Los Angeles Times, explains reporter Jerry Hirsch, comprises a variety of government incentives, including grants, tax breaks, factory construction, discounted loans and environmental credits that Tesla can sell. It also includes tax credits and rebates to buyers of solar panels and electric cars.  “Musk and his companies’ investors enjoy most of the financial upside of the government support, while taxpayers shoulder the cost,” Hirsch adds.

“Musk definitely goes where there is government money,” said Dan Dolev, an analyst at Jefferies Equity Research. “That’s a great strategy, but the government will cut you off one day.”

It doesn’t look as thought the Trump administration has cut Musk off, but perhaps his goals of Mars colonization may just have to wait or rely more on private partnerships and less on tax payer subsidies.  Those who can afford the $200,000 relocation joy ride may have some extra cash laying around to make their move to Mars a reality.