If Rep. John Conyers and Sen. Al Franken ‘deserve’ due process as Congresswoman Nancy Pelosi and other Democrats insist, isn’t that a privilege provided to citizens held to all of the laws of the United States?

With every Congressional session, lawmakers violate Federalist #57: “they can make no law which will not have its full operation on themselves and their friends, as well as on the great mass of the society. This has always been deemed one of the strongest bonds by which human policy can connect the rulers and the people together.” 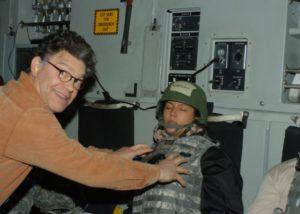 The practice of Congress exempting itself from the laws it writes emerged as Congress began to adopt broad social policy legislation. From exempting themselves from insider trading rules, to Obamacare, to the Freedom of Information Act, to being exempted from prosecution for retaliating against employees who report safety and health hazards, to having to train employees about workplace rights and legal remedies, and record-keeping requirements for workplace injuries and illnesses, Congress gets a pass on important laws private sector businesses and states are required to adhere to – or be sued.

As Federalist #57 said, one of the strongest points behind “they can make no law which will not have its full operation on themselves and their friends, as well as on the great mass of the society,” was this: “This has always been deemed one of the strongest bonds by which human policy can connect the rulers and the people together. It creates between them that communion of interests and sympathy of sentiments, of which few governments have furnished examples; but without which every government degenerates into tyranny.”

And what have we today?

“In 1964, with great fanfare, President Johnson signed the landmark Civil Rights Act, including Title VII, which for the first time protected all Americans from employment discrimination on the basis of race, color, religion, sex or national origin,” attorney Gerald Skoning wrote in the Wall Street Journal in 2013. “But the law exempted Congress from its coverage, so thousands of staffers and other employees on the Hill were left with no equal-opportunity protection. Staffers could be discriminated against or sexually harassed with legal impunity.”

Skoning points out that it took Peter Schweizer’s book, “Throw Them All Out,” and a “60 Minutes” episode for Congress to pass the Stop Trading on Congressional Knowledge Act of 2012, which banned insider trading by lawmakers and their staffs. “But just last week, while voters were focused on emotional issues such as immigration and gun control, House and Senate members voted to repeal a key provision of the so-called Stock Act—the one that required online posting of their staffs’ financial transactions,” Skoning reported in his 2013 op ed.

As recently as 2015, the Securities and Exchange Commission investigated Congress for insider trading however, Congress moved to block the investigation, undermining its own ethics rules, the Intercept reported.

President Donald Trump has threatened to take away the Obamacare exemption from the 535 lawmakers and the more than 13,000 Congressional staffers, granted by former President Barack Obama. The bogus cries from Congress of “Health Care For All” ring hollow knowing they are exempted from the disastrous law.

“Congress would be a very different institution if it were truly covered by the laws that apply to the rest of Americans,” Heritage Foundation scholar Dan Greenburg said in a 1993 speech. “Congressional coverage would give congressional employees the same workplace and equal opportunity regulations as the private sector. Congressional offices would have the same duties of record-keeping and disclosure that executive agencies have, allowing the public greater access to information about Congress. Members of Congress would share directly in the burdens and impositions of the laws they pass.”

One surefire way to drain the swamp would be for Congress to lose all exemptions to laws they pass, and President Donald Trump is just the guy for the job.

As for due process for Sen. Franken and Rep. Conyers, they deserve due process every bit as much as U/S. Senate candidate Judge Roy Moore does.