Hillary Clinton may shatter the proverbial glass ceiling by being the first women nominated as the Democrat Party’s Presidential nominee, but Donald Trump is also significantly historical.

People say Hillary Clinton’s candidacy for U.S. President is historical only because she is a woman. Blah blah blah. Feminist author Camille Paglia called Hillary Clinton an “ethically challenged incompetent,” and has repeatedly challenged Hillary’s feminist credentials.
Why is Donald Trump’s candidacy also historical? Trump is the first candidate in U.S. history who is not a politician, government worker, political appointee or a top military officer.
The Presidents who had never been elected to public office before being elected President were: Zachary Taylor, Ulysses S. Grant, Herbert Hoover, and Dwight D. Eisenhower. Taylor, Grant and Eisenhower were in the military, and Hoover was Secretary of Commerce.
Of the 55 U.S. Presidents, 26 had previously been lawyers, 22 had previous military experience, and nine were Generals in the U.S. Army.
Trump isn’t a lawyer. Trump has never been in government.
The closest example was the 1940 Presidential race, when the GOP named Wendell Willkie its candidate for president. Originally a Democrat, Wilkie, an attorney and utilities executive, switched parties in 1939 in opposition to President Franklin Roosevelt’s Tennessee Valley Authority. During a deadlocked GOP convention,
Party leaders turned to Wilkie as an alternative presidential nominee to Thomas Dewey.
Trump also received more than 13 million votes in the primary, giving him more votes than any candidate in Republican history – even with 17 candidates in the race.
Trump Trumps Politics as Usual
Trump’s rise is a direct result of the gross self-absorption and corruption of the elite U.S. political class. They stopped listening to the American people, and consequently became deaf to public anger over a succession of economic and foreign policy failures, and government corruption – by both parties.
And the media is probably even more corrupt. “The media have remained smugly hostile to Trump, despite warnings that a majority of Americans despise the media too,” the Spectator UK said in a recent article. “American presidential politics is a jungle; the nominees are great beasts, but Donald Trump is larger and fiercer. In taking over a major US political party from the outside, he has done something that has never been done before, and he should win.”
The Not-So Feminine Mystique of Hillary Clinton 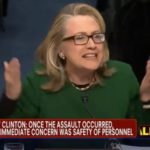 Hillary Clinton is running on a “feminist” platform, and claims to be pro-women. Frankly, it’s all she’s got in her handbag. But do not forget Hillary was also the brains behind destroying the lives of the long list of women who accused Bill Clinton of rape and sexual assault – a very unfeminist role. It’s classic Hillary to say sexual-assault survivors have a “right to be believed,” after she did the opposite to her husband’s victims, and hired detectives to harass and intimidate the “trailer trash,” “sluts” and “whores” who were raped by Bill. Hillary is no feminist; she’s as big of a predator as her husband.
Kathleen Willey and Juanita Broaddrick, who both claim Bill Clinton sexually assaulted and raped them, said Hillary hired detectives who threatened them.
No Glass Ceiling According to Feminists
“Hillary, by contrast, seems to want to be more like a man in her demeanor and politics, makes few concessions to the social demands of femininity, and yet seems to be only a partial feminist,” wrote Susan J. Douglas in 2008 about Hillary’s run for President. Douglas is a professor of communications at the University of Michigan and author of Enlightened Sexism: The Seductive Message That Feminism’s Work is Done. “She seems above us, exempting herself from compromises women have to make every day, while, at the same time, leaving some of the basic tenets of feminism in the dust. We are sold out on both counts. In other words, she seems like patriarchy in sheep’s clothing.”
Douglas and her progressive feminist friends were not enamored of Hillary in the 2008 election. “All of this frames many women’s reactions to Hillary. If she’s a feminist, how could she continue to support this war for so long? If she’s such a passionate advocate for children, women and families, how could she countenance the ongoing killing of innocent Iraqi families, and of American soldiers who are also someone’s children? If it would be so revolutionary to have a female as president, why does she feel like the same old poll-driven opportunistic politician who seems to craft her positions accordingly?”
Feminists For Trump
The Trump organization has more female than male executives, and many of the women are paid more than the males. The ultimate pro-feminist employer is one that is performance-based, as is the Trump organization, rather than gender-based.
However, during her time in the U.S. Senate, Hillary Clinton paid her female employees 72 cents for each dollar paid to her male employees — $15,708.38 less than the median salary for men, between 2002 to 2008, according to a 2015 report by the WashingtonFree Beacon. Better to ignore what Hillary says, and focus on her actions.
Camille Paglia, the well-known feminist author and university professor, had this to say about Hillary vs. Trump: “Hillary is a stodgily predictable product of the voluminous briefing books handed to her by a vast palace staff of researchers and pollsters—a staggeringly expensive luxury not enjoyed by her frugal, unmaterialistic opponent, Bernie Sanders (my candidate). Trump, in contrast, is his own publicist, a quick-draw scrapper and go-for-the-jugular brawler. He is a master of the unexpected (as the Egyptian commander Achillas calls Julius Caesar in the Liz Taylor Cleopatra). The massive size of Hillary’s imperialist operation makes her seem slow and heavy. Trump is like a raffish buccaneer, leaping about the rigging like the breezy Douglas Fairbanks or Errol Flynn, while Hillary is the stiff, sequestered admiral of a bullion-laden armada of Spanish galleons, a low-in-the-water easy mark as they creak and sway amid the rolling swells.”
History in the making…
Paglia called the Democrat Party “the kamikaze party,” and referred to Hillary Clinton as an “ethically challenged incompetent.” Then she ended her recent article with this thought: “Trump is a stormily dynamic change-maker who will surely win this election unless the Democrats get their house in order…”
The reason so many in America are rooting for Donald Trump is that he single handedly disrobed the Republican Party, and bared the dirty, corrupt underbelly which colluded on the admission of 12 million illegal unskilled workers, the bad trade deals which undermine U.S. manufacturing and jobs, called ‘Islamic terrorism’ what it is, and vowed to bring back law and order and rebuild the military.
As Conrad Black wrote in the Spectator UK, acknowledging this historical election, “he has done something that has never been done before, and he should win.”