“Not since the Vietnam War has there been this level of disappointment in the behavior of America throughout the world, and I don’t think that another incredibly polarizing figure, no matter how smart she is and no matter how ambitious she is — and God knows, is there anybody more ambitious than Hillary Clinton? — can bring the country together.  David Geffen, 2007

One in four democrats now believe that Hillary Clinton should suspend her campaign. Newly released emails paint an ugly picture regarding our nation’s national security and paint an even uglier picture of Benghazi. The former secretary of state is slowly becoming what one weary democratic donor called a “Side Show.”   In her next national show, The Benghazi Hearings,  Hillary will go under oath and take the stand in order to answer to the tens-of- thousands of pages of new information,  much of which was just released due to a federal judges order, her current FBI criminal investigation and multiple FOIA requests.  Trey Gowdy will be leading these hearings sometime in October, and I am certain that national security will be a focal point of his questioning.  Maybe these hearings will provide us with that historical “October Surprise” that surprisingly occurs during election cycles, and  maybe her answer of “What difference does it make,” will look just as foolish the second time around.
Meanwhile, in another side show, the Pro Jo memo is circulating to the members of the DNC and just one week prior to the DNC summer meeting in Minneapolis.  Barack Obama has now blessed Joe after hanging with Hillary and Bill in the Hamptons last week.  Elizabeth “High Cheek Bones” Warren, has “secretly” met with Joe.  Top Democratic donors have been invited to meet with Joe after Labor Day.  Most of us had a cup of Joe this morning. Joe is trending, and not due to his latest gaffe. This BFD is his potential announcement to run for the presidency.  At the age of 72, that is a BFD.
The presidential ticket for the Democrat Party does not have any clear winners.  The Democrats have an identity crisis, as never more evident in this exchange between the DNC mouthpiece Chris Matthews and the other mouthpiece, Debbie Wasserman Schultz.  When the DNC chairwoman cannot explain the difference between a socialist and a democrat, the party is either lost or exposed.   Due to this shift, many Blue-Dog Democrats have been left in this progressive wake.  These orphans could easily emerge as the “Trump Democrats” the GOP candidate who is currently leading in the polls–just as there were Reagan Democrats; and with an administration that rivals the malaise of Carter, these are the democrats ready to jump the sinking ship. The wedge issues of immigration and abortion are no longer the DNC’s strongest bargaining chips.  When the StemExpress CEO, Cate Dyer, is shown laughing about how StemExpress purchases fully intact aborted babies from Planned Parenthood, the Dems favorite wedge issue of abortion has taken a severe, morally depraved turn. I have to believe that the majority of the country is more conservative than this barbarism.
Yet the rise of Socialists like Bernie Sanders and Elizabeth Warren cannot be overlooked.  As Trump fills stadiums with tens of thousands, so does Bernie. But, the DNC cannot give the nomination to Bernie Sanders, a socialist, or they ruin their “moderate-progressive” brand.  What is the DNC Plan B?  A moderate-progressive ticket–a Biden Warren ticket who can charm the moderates and appease the Sander’s #FeelTheBern socialists. Corporate cronyism is Warren’s favorite topic and she speaks well to it.  However, she believes that the cronies in government will solve the “free market problem” by expanding government.  Obviously not a conservative viewpoint.  Plenty of GOP candidates, like Fiorina, Cruz, Paul, are talking about corporate cronyism and how to fix the quid-pro quo relationships between big corporations and big government. Their solutions aren’t to expand an already bloated and corrupt government, but to reform the government by downsizing it.
The GOP’s conservative messaging is winning in key states against the DNC front runner, Hillary Clinton.  The Champion of Everyday People isn’t filling the stands.  Carly Fiorina summed up this election with the following statement taken from the Fox News “Happy Hour” debate:

2016 is going to be a fight between conservatism, and a Democrat party that is undermining the very character of this nation. We need a nominee who is going to throw every punch, not pull punches, and someone who cannot stumble before he even gets into the ring.

The Democrats may announce a Biden Warren ticket.  The GOP will have to choose their contenders wisely.
In February 2009, after Barack Obama’s inauguration, Time Magazine published this cover: 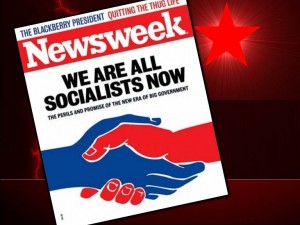 Are we all socialists now?  Obviously not.  Not yet.