It was pride that changed angels into devils; it is humility that makes men as angels. ~ Saint Augustine

Liberals abhor competition. Liberals are not only sore losers, they are vile winners. There is no grace or humility in winning or losing, to a liberal.

It doesn’t matter what they fail at, liberals always blame someone else – it’s never their own fault. And when they don’t like outcomes, they throw tantrums and demand that others must change their behavior.

And so we have the 2016 Presidential election. Republican Donald J. Trump won and Democrat Hillary Clinton lost. The bleating, whining, crying hysteria coming from the left sounds like a day care center – they are behaving no differently than petulant, hysterical toddlers throwing food and temper tantrums.

And while temper tantrums can be a normal and common part of early childhood, sometimes they are a sign of a problem that needs to be addressed – especially in adulthood. Frustrated parents ask experts on psychology websites, “When is a red faced preschooler screaming and flailing about normal; when is the tantrum a cause for concern? What’s too often? What’s too long? What’s too extreme?” 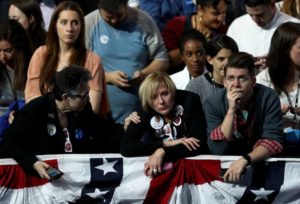 On the Late Show, liberal host Stephen Colbert asked how God could “let” Donald Trump win. On election night, Colbert shrieked, “What the fuck is happening?”

On 60 Minutes, in an interview with the President-elect, Lesley Stahl told Trump, “But everyone thought you were going to lose,” as she stared at him incredulously.

MSNBC’s Rachel Maddow hysterically said on election night, “You’re not having a terrible, terrible dream. Also you’re not dead and you haven’t gone to hell.”

The Brain Trust at The View

The brain trust from the daytime television show The View, co-host Joy Behar recently shared her political savvy. “Do we have to wait until Trump puts a Hammer And Sickle On The American Flag before we stand up to this guy?” Behar asked on The View this week. Behar also said Trump should “step down” before his inauguration, over claims that Russian hackers altered the election results. “It’s like they are discrediting the CIA, his campaign and he, the president-elect of this country, is discrediting the organization that basically protects us from foreign invasion,” Behar said. “Isn’t it time for him to step down?”

“I mean, he has to step down before the inauguration before they give him the nuclear codes,” she added. “We are at risk when the president of the United States is fighting with the CIA. That is a terrible thing.”

This prattle from Behar came only a week after saying Trump is mentally ill. “Mental illness,” Behar said. “Sorry, I couldn’t control myself.” “Maybe we can still get him out. There’s a possibility,” she added. “It’s not that I don’t agree with him. He’s not right in the head. Donald Trump has never appeared stable to me when he has come on the show. No, he has not.”

Celebrity nasty woman Amy Schumer, who promised to move out of the U.S. if Trump won, instead took to Instagram condemning Trump and his supporters, calling them “weak” and “misinformed.” Schumer wrote “Anyone saying pack your bags is just as disgusting as anyone who voted for this racist, homophobic, openly disrespectful woman abuser,” as she defended Clinton’s email scandal.

Repugnant “feminist” Lena Dunham, an ardent Hillary Clinton supporter, wrote in her blog about Trump’s election, “It’s painful to know that white women, so unable to see the unity of female identity, so unable to look past their violent privilege, and so inoculated with hate for themselves, showed up to the polls for him, too. My voice was literally lost when I woke up, squeaky and raw, and I ached in the places that make me a woman…”

Bleating about your “achy places” doesn’t make one a woman, but psychological resilience, adaptability and staring adversity in the face does. Lena Dunham will never understand this. 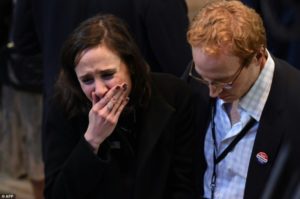 “Students themselves began demanding the postponing of exams, or even no class for the rest of the week, in order to deal with the Trump’s victory,” Milo reported on Breitbart. At Loyola University, a petition was created to cancel class, accumulating over 300 signatures.

Yale students were so distraught they asked their professor to cancel midterm exams (at least one professor happily made his exam optional), FoxNews.com reported.

University of Michigan students occupied the school’s library where they held a candlelight vigil to protest Trump’s victory, Campusreform.org reported. Professors at the University of Connecticut, University of Rochester and Iowa State University cancelled classes because they simply couldn’t face the day.

These college students demanded toys, play-doh, hot cocoa and comfort foods, coloring books, and bubbles. I don’t know about you, but when I was in college, I held down a job and a heavy class load. There was no safe space in my busy real world other than mandatory quiet time in the university library studying into the wee hours of the morning.

I also think of America’s young men in combat, dealing with the horrors of terrorism and war. It’s their parents, strong mothers and fathers, who best define their world. The world of the infantile college students is also defined by parents who still coddle, indulge, and make excuses for failures.

Family therapist Leonard Sax wrote a book about this phenomenon, The Collapse of Parenting: How We Hurt Our Kids When We Treat Them Like Grown-Ups. Sax addressed some parenting behaviors that have lead to a generation of fat, entitled, mollycoddled, feeble, and thin-skinned children. “Over the past three decades, there has been a massive transfer of authority from parents to kids,” Sax wrote. “Along with that transfer of authority has come a change in the valuation of kids’ opinions and preferences. . . . what kids think and what kids like and what kids want now matters as much, or more, than what their parents think and like and want. . . . These well-intentioned changes have been profoundly harmful to kids.”

College students are still students — kids in fact — still very young, and not always particularly smart… yet. Who would value their childish hysterics when they are incapable of behaving maturely? The answer is found in liberal adults who often behave in the same manner – they are also whining, crying, vile name-calling liberals, attacking the people they disagree with, and lost to.

New York City Mayor Bill de Blasio announced he is offering counseling services and therapy for dealing with stresses brought on by Donald Trump’s election. It’s a city-wide “safe space” for government employees. Will there be hot cocoa and comfort foods, Legos, coloring books and bubbles to play with?

There is no secret to winning with humility or losing with grace. My grandfather used to say, “Don’t raise your voice; improve your argument.”