Our nation’s capital has become the seat of a buddy system that functions for its own benefits, increasingly insensitive to the needs of the American worker who supports it with his taxes. Today it is difficult to find leaders who are independent of the forces that have brought us our problems: the Congress, the bureaucracy, the lobbyists, big business, and big labor.

On Super Tuesday, Paul Ryan and Mitch McConnell took time out of their progressive ass-kissing and capitulation to assure Americans that the GOP party was an inclusive party, without bigotry, and is the party of Lincoln. Take a look at the headline over at CNN: 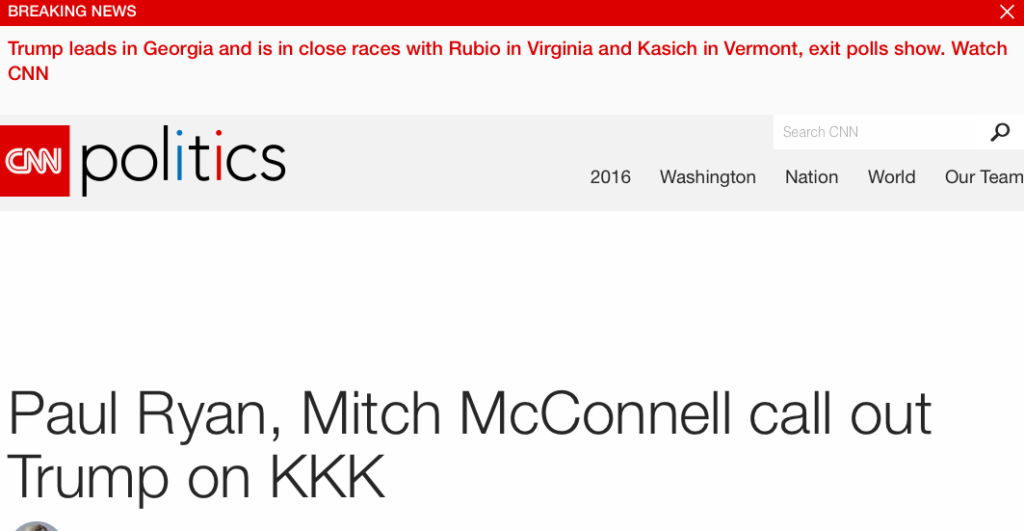 If anybody is wondering why Paul Ryan made a national and desperate statement on a strategic day, they may have missed the “KKK Effect.” 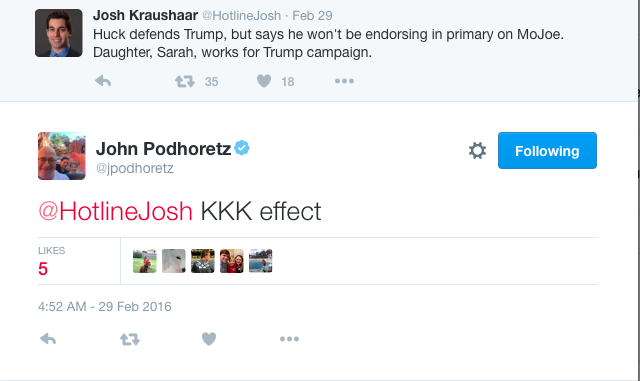 The KKK Effect/impact was created to manufacture headlines and outrage from “conservatives”  for the sole purpose to cut into Trump’s commanding lead, thereby giving Marco! a chance to win or place second in swing states. I had assumed that these uber politicos would have watched the Friday presser in which Chris Christie endorsed Donald Trump.  According to their respective Twitter feeds, they did.  They saw Trump disavow David Duke, but they ignored it and they continued to ignore him seven more times.  Truth isn’t their winning strategy.  Winning one for “conservatives” and for their beloved loser, Marco! was the goal and Marco! did win one state… Minnesota.

Before the race card was played, making fun of Donald Trump’s hands started trending on Twitter and Marco! was eager to join in Rick Wilson’s creepy fascination and losing strategy.  #NeverTrump “super conservatives” took to Twitter to pledge their allegiance to losing candidates (some even mentioned Gary Johnson) and SuperPacs were formed to destroy Trump before he destroyed all of their so-called “conservative progress.”  According to Pat Buchanan, these conservatives would prefer to lose with Clinton than win with Trump:

Undeniably, a Trump presidency would mean an end to the Bush and establishment policies on trade, immigration and intervention.

But those policies have already been repudiated in the primaries, as they have proven to be transparent failures for America.

The Gang of Eight, leftist tactics and sophomoric behavior didn’t give Marco! much traction on Tuesday, but moderates, as proven time and time and time again, aren’t winners.  According to exit polls in GA, AL and VA, roughly 6 out of 10 voters felt betrayed by the GOP party. If the GOP establishment was conservative, they wouldn’t have passed Omnibus and relinquished the powers of the purse to fund a progressive agenda.

According to Pat Buchanan:

As long ago as the early 1990s, populist conservatives were imploring George H.W. Bush to secure our Mexican border, as tens of thousands poured across in the San Diego-Tijuana corridor. Gov. Pete Wilson turned near-certain defeat into a stunning comeback victory in 1994 by promising to send the National Guard.

What is conservative about uncontrolled borders?

If the GOP establishment was conservative, they would have built a wall.

The only wall that the GOP establishment is eager to build this year, or in any prior year, is a wall guarding the beltway elite from the American people. The American people–independents, democrats, republicans, evangelicals, people of color, the working class, veterans, military, and  union members are all a part of Trump’s movement to Make America Great Again.  They want a nation with a defined border.  They want our laws upheld and enforced.  In essence,  they want safety, security and jobs.  The republican establishment has lied to them, insulted them and failed them, and they continue to do so without apology. While the Democrats are fighting over who is less communist and losing voters and momentum, the American people are turning out in record numbers to register and vote for a GOP nominee.

After the Super Tuesday results, Reince Preibus, issued this statement:

“While Democrats have seen turnout drop across the board, the record number of Republicans who have gone to the polls in each state shows the country is ready for change after eight years of failed leadership from President Obama. Democrats simply aren’t being energized by Hillary Clinton’s calculated campaign to maintain the status quo or Bernie Sanders’ fringe calls for a socialist ‘revolution.’

“The Democrat Primary has become a race to the far left between an embattled frontrunner facing an FBI investigation and a self-avowed socialist who continues to win states and outraise the Clinton machine. At the end of the day, Democrats are saddled with two fundamentally flawed candidates destined to fail in a general election and a message that isn’t resonating or in line with the majority of Americans.”

March 15th is D-Day in the Republican Primary and from now until then the SuperPac conservatives are going to use every leftist, dirty tactic to stop Trump.  TRUMP WILL LOSE TO HILLARY, they scream!  But how do they come to this conclusion when Hillary can’t fill a school bus with supporters and Trump is filling stadiums?  Where will the Berners find a home? With a woman who represents everything they despise, or with an outsider who can beat the Democratic establishment….like Trump?  If the Trump movement/phenomena remains unabated, and the American people, who are rising in record numbers, are wise to this strategic game, the RNC will be forced to make a choice:  hand the nomination to the winner or continue to follow the losers into a brokered convention.   This is America’s time for choosing, and American’s are choosing populism over the establishment GOP– the conservative con artists who have destroyed the GOP brand for decades and, thereby, destroyed the trust of their electorate and the fundamental principles of the grand old party.