As Chicanas and Chicanos of Aztlán, we are a nationalist movement of Indigenous Gente that lay claim to the land that is ours by birthright. As a nationalist movement we seek to free our people from the exploitation of an oppressive society that occupies our land. Thus, the principle of nationalism serves to preserve the cultural traditions of La Familia de La Raza and promotes our identity as a Chicana/Chicano Gente.

By Katy Grimes and Megan Barth

CA Marxists Ramping Up Destabilization of the Golden State

Many wonder why Xavier Becerra was chosen by Brown. But all anyone has to do is peek into the radical California Legislature, and fanatical Gov. Jerry Brown, to see the trend of militant Marxist, Socialist, Jesuit, Liberation Theology, Latino activism on the increase.

The goal by these extremists in California is to push the state, and eventually the country to such a crisis, a reorganization is the only cure. That is what Communists do. Modern day “Progressives” as they like to be called, like Brown and Becerra, refer to themselves as Multiculturalists and Progressives. But as history very clearly demonstrates, using Marxism as the cure to anything in society is a very dark fairytale.

The term “progressive” is simply another way of saying “socialist” or “Marxist;” But it’s as important to recognize how liberation theology factors into the radical Latino lawmakers: In Latin America, the big enemy is not Marxism, it is capitalism. And the main enemy of liberation theology, according to its founder, the Rev. Gustavo Gutierrez of Peru, and many of its adherents, is the United States–Michael Novak, the author of the 1984 ”Freedom With Justice: Catholic Social Thought and Liberal Institutions.” Novak describes liberation theology as “gaining its excitement from flirting with Marxist thought and speech.”

As Fox News pointed out in a 2003 interview on the Sean Hannitty Show, Becerra has a devout relationship with MEChA, as well as The Fabian Society. But don’t go looking for the clip; it is apparent Becerra’s people have been busy at work cleaning up his inline reputation and record.

“I got to be the first in my family to go to college” thanks to MEChA, Becerra said.

Hannity repeatedly pressed Becerra on why he would belong to a group that preaches racial discrimination, prompting the Bustamente backer to complain, “Are you calling me a racist?”

When the Fox host pointed out that MEChA favors the return of California to Mexico, Becerra still declined to criticize the group, saying, “I got a lot of help from people in the organization who have promoted education for kids and who continue to do that. … What I know is what they do.”

MEChA is a Hispanic separatist organization (400 chapters nationwide and in many high schools) that encourages anti-American activities, civil disobedience, and romanticizes Mexican claims to the “lost Territories” of California and the Southwestern United States, in a Chicano country called “Aztlan.” The official national symbol of MEChA is an eagle holding a machete-like weapon and a stick of dynamite. 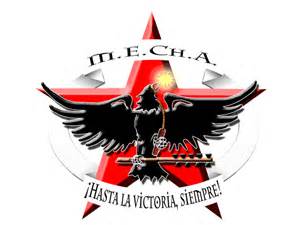 The Fabian Society and Fabian Socialism uses the teachings of John Maynard Keynes as their catechism of political economy. Like Marxism, it embraced the idea of a Communist Utopia, where the State owned everything and controlled every aspect of the public’s lives. They have installed Fabian Socialism and Keynesism as the new faith, both in the Universities and in Government bureaucracy. Keynes supported statism and socialism, and managed and planning economies. U.S. President Barack Obama has long advocated the use of Keynesian economic concepts — despite the fact that John Maynard Keynes was incompetent, a fraud, and accused of being a pedophile.

These groups have worked diligently behind the scenes to implement their Socialist policies into our government, labor unions and throughout academia. They have infected the working class, demanding higher and higher wages, resulting often in welfare and other government handouts once their employers are ruined. They use illegal immigrants as messengers of their ideology, demeaning patriotism, and America. And they have manipulated the political process so that only those candidates well-versed in Marxism receive the attention of the corporate Media.

Even though the law doesn’t allow them to vote, illegal immigrants are changing the landscape of the U.S. government, especially in California, by impacting the census’ through mass migration. California allows illegal aliens to vote.

Former Mechista Rep. Xavier Becerra, the U.S. congressman for California’s 31st District, says what all leftist Latino lawmakers say: their (illegal) constituents still pay taxes and contribute to society, therefore they should vote. — “An individual doesn’t have to be a citizen to pay taxes – you pay taxes if you work in this country, you pay taxes if you purchase something,” Becerra said.

Led by Los Angeles County Federation of Labor head Maria Elena Durazo, a group of socialist and Communist California labor officials and Democrat Party operatives created a program to target Latinos and immigrants (illegal and legal) to permanently drive California politics far to the left, Democrat political consultant Richie Ross wrote in CalBuzz in 2010. Ross openly boasts of targeting the Latino community’s fear of anti-illegal immigration measures, to drive the community even further into the arms of the Democratic Party.

In 1994, then-Governor Pete Wilson put Proposition 187 on the ballot.  It was called the nation’s first anti-immigrant initiative, but in fact the goal of Proposition 187 was to make illegal aliens ineligible for public benefits including public social services, public health care services, and public school education. It came in the middle of a deep recession in California and was popular partly because the fiscal estimate from the California Legislative Analyst’s Office said that it would save the state about $200 million/year.

The two most significant Marxist groups in the United States, the Communist Party USA and Democratic Socialists of America, are both committed to increasing the Latino vote in order to give Democrats a permanent electoral majority.

“Durazo, Villaraigosa and Cedillo, all trained under legendary Los Angles Communist Party USA activist, Democratic Party activist and “immigration reform” pioneer Bert Corona,” Trevor Loudon wrote in 2013. All three have long ties to both the Communist Party USA and Democratic Socialists of America, and coincidentally were all prominent California supporters of presidential candidate Barack Obama and long time ally of both the Communists and DSA.

Villaraigosa has a long history with MEChA. As a student, he headed the UCLA chapter of MEChA, but left UCLA six weeks before graduation to become a full-time organizer with Corona’s Centro de Action Social Autonoma.

Communists seek to use amnestied illegals to build a “permanent progressive majority.” Most thinking Americans know that Democrats only care about illegals for the winning voting bloc they can provide, but most are unaware that this idea was hatched and developed by the American Communist Party, which Richie Ross clearly explains in his op ed:

The campaigns we developed broke new ground, organized new union workers, and increased the political impact Latino voters have had on California politics – simultaneously tripling their number of registered voters, increasing the Democratic share of that vote by 50%, and doubling the percentage of the total votes cast in California from Latinos.

Through the rest of the 1990′s our campaigns focused on legislative races in Los Angeles.  We succeeded.  But it was all small.

In 2000, our message was controversial (until it worked).  “If you want to make a difference, voting isn’t enough.  Don’t bother voting unless you sign our pledge to get 100% of your family to vote.”  Latino turnout rose… and accounted for 14% of the votes cast according to the State’s voter registration and voting history records.

Trevor Loudon’s 2013 book, Enemies Within: Communists, Socialists and Progressives in the U.S. Congress, “profiles fourteen Senators and more than fifty Representatives. Their ties to Communist Party USA, Democratic Socialists of America, Workers World Party, the Institute for Policy Studies, Council for a Livable World and other radical anti-American organizations.”

Loudon identifies Bert Corona, as the “Communist Father of the ‘Immigrants Rights’ movement” in 1960. In 1964, Corona, Cesar Chavez and future Democratic Socialists of America member Dolores Huerta forced Congress to end the guest worker “Bracero” program. Later, Corona sought ways to address “problems confronting Mexicans in the United States who had no visas or citizenship documents” – in other words, illegal aliens – including “how to defend persons detained by immigration authorities and how to help immigrants acquire disability and unemployment insurance and welfare.”

Tarzynski listed 25 people he thought should be on an “A-list” of “25 or so leaders/activists/intellectuals and/or “eminent persons” who would gather periodically to theorize/strategize about how to rebuild a progressive movement in our metropolitan area that could challenge for power.”

In further preparation for battle, the California legislature just hired former Attorney General, Eric Holder. “Having the former attorney general of the United States brings us a lot of firepower in order to prepare and safeguard the values of the people of California.” Kevin de Leon, the Democratic leader of the Senate, said in an interview. “This means we are very, very serious.”