Free enterprise has done more to reduce poverty than all the government programs dreamed up by Democrats.

In a recent study by the Kaiser Family Foundation, 24 states have a majority of births financed by Medicaid.  You read that right. A majority of births in nearly half of our nation are born into poverty. This is progress according to Socialists, the champions of big government (not the little guy) and the architects of the disaster known as Obamacare.  So why would Socialists double down on a big government solution to a big government problem known as Obamacare?  Simple.  More dependency yields bigger bureaucracy.  Bigger bureaucracy yields more wealth confiscation.  Wealth confiscation yields more poverty, and the vicious, Socialist experiment continues until there is equal misery and poverty for all–except for the politically-connected bourgeois.

Following in California’s Single Payer foot steps, the newly elected and appointed Socialists in Nevada passed “Medicaid for All.”  According to Vox:

“Nevada, with little fanfare or notice, is inching toward a massive health insurance expansion — one that would give the state’s 2.8 million residents access to a public health insurance option.

The Nevada legislature passed a bill Friday that would allow anyone to buy into Medicaid, the public program that covers low-income Americans. It would be the first state to open the government-run program to all residents, regardless of their income or health status.”

Nevada Governor Sandoval,  a moderate Republican, who championed and oversaw the largest tax increase in Nevada’s history (raising taxes is what moderate Republicans do), will have to decide by Friday, June 16th, if he will fix Obamacare and Medicaid by allowing all Nevadan residents (legal and illegal) to sign up for Medicaid! By allowing this bill to become law, the next Kaiser study will have Nevada moving from sixth to first in the nation of Medicaid births.  Progress!

Medicaid for All/Medicare for All  is a revived plan to “fix” spiraling costs, coverage and access to healthcare.  Yet, wasn’t Obamacare sold as the solution to all of our healthcare woes?  Yes, but the sell relied on the stupidity of the American voter.  Obamacare was sold to fix healthcare but was never designed to fix healthcare.  Obamacare was simply a political mechanism to create the bureaucracy and dependency needed to pave the way for the next Socialist leader to implement a single payer healthcare system. Who needs to rely on the stupidity of the American voter to pass a single payer system, when a near majority of states are breeding Medicaid dependents?

On the national level, Congresswoman Dina Titus (D-NV) and her comrades are trying to sell Medicare for All. 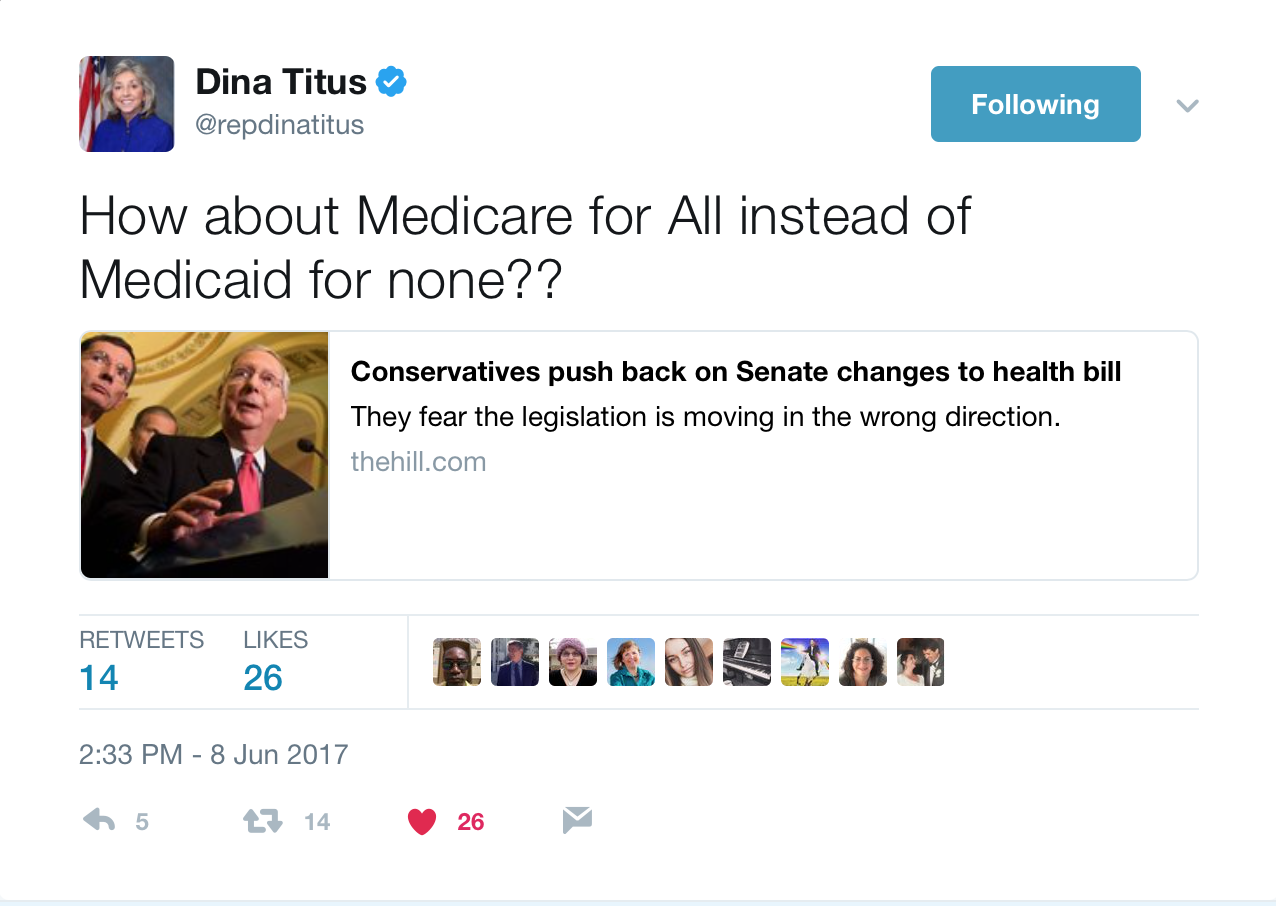