The supreme quality for leadership is unquestionably integrity. Without it, no real success is possible, no matter whether it is on a section gang, a football field, in an army, or in an office.

California is in a crisis. Actually, California has many crises taking place, including a crisis of leadership. This lack of leadership has led to glaring misplaced priorities, and now, a crisis of tremendous proportions of aging and severely damaged infrastructure.

The Oroville Dam Spillway hole appears to be much larger than state officials originally let on.

Levees throughout the Central Valley, Carmel Valley, and Northern California, have breached and flooding is forcing residents to evacuate.

And now a large portion of Highway 50 in El Dorado County in the Sierras has collapsed near Bridle Vail Falls.

Where in the world is California Gov. Jerry Brown? The Democratic Governor is missing in action. He hasn’t flown over the Oroville Dam to observe the damage. He hasn’t visited the area to talk to the people fearful of massive flooding. He hasn’t been seen at any of the levee breaks.

Sounding rattled, Brown finally held a press conference on the evening of Feb. 13 at the Office of Emergency Services, two days after 200,000 residents were evacuated near the Oroville Dam, where he asked for federal assistance. It was awkward, particularly following the presidential election, when a defiant Gov. Brown redoubled his promises to protect illegal aliens, invited more refugees to California, and continue his lone fight against climate change, in violation of federal law, and in opposition to President Trump’s stated policies.

“We will protect the precious rights of our people and continue to confront the existential threat of our time–devastating climate change,” Brown said in November. This is Brown’s evangelism, despite how arbitrary and destructive his wealth-redistribution environmental regulations have become.

Only one week ago, Gov. Jerry Brown’s office submitted a wish list of $100 billion of “key” infrastructure projects for investment statewide, which included raising Folsom Dam to improve flood protection. The list did not specifically list Oroville Dam, but Brown’s pet High Speed Rail project made the list, CNBCreported. “The priority list prepared by California follows calls by President Donald Trump for $1 trillion in infrastructure projects nationwide. Most of the projects on the three-page wish list involve transportation-related projects, such as highways, bridges rail or transit.”

But Wait! That’s not all!

“The Governor has not put real transportation funding in his budget,” Sen. John Moorlach, R-Costa Mesareported in a recent op ed. “His latest budget mentions $4.2 billion. However, it needs a new revenue source to fund it! If the Governor were serious about fixing the State’s roads, why doesn’t he start allocating some funding to this task? Why not allocate $500 million out of the $122 billion in the general fund budget?” 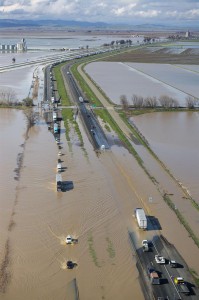 Instead, Brown continues to focus on climate change issues, which he describes as “existential threats to humanity,” and the election of Donald Trump has made Brown more defiantly stubborn.

In December, Gov. Brown told embattled climate scientists at the American Geophysical Union conference in San Francisco that the state stands ready to lead the charge against climate change if Washington won’t, KQED reported. “We will set the stage,” Brown said. “We will set the example. And whatever Washington thinks they’re doing, California is the future.”

What’s the Plan For California’s Water?

As the Oroville Dam spillway collapses and water threatens to flood the homes and businesses of more than 200,000 north state residents, the 27 water agencies, 23 million people and thousands of acres of farmland dependent on this water are watching their future supply disappear. So, what’s the plan?

Gov. Brown’s “Water for the 21st Century” plan is on his website:

Ensuring safe and sufficient water supplies for the 21st century requires significant investments in our water infrastructure and natural ecosystems. After five decades of divisive wrangling, the time has arrived for the governor to provide real leadership and solve our longstanding water problems. The goal must be to maintain and enhance water supplies for all Californians and take action to restore the Bay-Delta and meet California’s true water needs.

The collapse of the Oroville Dam spillway highlights the need for the Governor to actually make the necessary investments to update the state’s aging dams, bridges, flood control projects, highways and roads, and stop pretending he is prioritizing this. “The time has arrived for the governor to provide real leadership and solve our longstanding water problems…” Where is this leadership?

Meanwhile, Brown is missing in action. He hasn’t flown over the Oroville Dam to observe the damage. He hasn’t visited the area to talk to the people fearful of flooding. He hasn’t sent surrogates to stand in for him.

Instead, Brown continues to hit Californians over the head with his climate change policies, even as the Trump administration makes plans to deconstruct the federal government’s fraudulent climate change regulations.

“Why is it that this Governor only talks about the problems?” Sen. Moorlach asked in his op ed. “He provides no leadership on solving them. We have the worst balance sheet of all 50 states and all I hear from him is how important it is to address global warming?

Where in the world is Gov. Jerry Brown? Your legacy is calling you Governor.

You don’t lead by hitting people over the head – that’s assault, not leadership.