Every day on the news there are stories of well-organized protests. I report from the California State Capitol which almost daily is ground zero for some group protesting a grievance.  As a political journalist, I am skeptical of most protests. It does not matter if the protestors are wearing hard hats and orange vests and stand all day in front of an office building under  construction, or a prominent restaurant feigning outrage showcasing a giant inflatable rat to passersby. 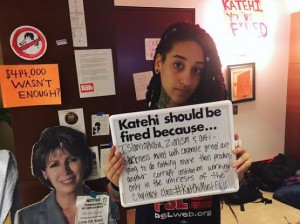 While every citizen is entitled to his or her own voice for a cause, the professional paid protesters who appear at protests all across the state and even across national borders are mercenaries.

The average employed American does not have the time to protest, yet we often see the same people at different protests around the state. Where does the funding for these rent-a-mobs come from?

Recently, at anti-Trump protests, protesters admitted they answered ads on Craigslist and were getting paid to protest Trump. Orchestrated by supporters of Hillary Clinton, the protests are largely paid for by George Soros, MoveOn.org, reclusive billionaire Jonathan Lewis, and pushed by David Brock at Media Matters for America, the Daily Caller reported.

While nonprofit organizations are legally allowed to do this, there are tax rules and restrictions on activities, which many manipulate and violate. But voters have a right to know what interest is trying to get them to vote a certain way. 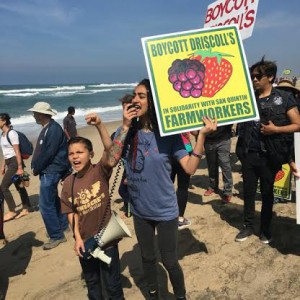 Only paid professional activists and those paid to organize by their employers have time to protest. Most protests we see are not naturally  occurring events, but highly orchestrated, well ­funded actions designed to push a political agenda for powerful special interest groups.

One example is a young woman named Maile Hampton, who in the span of only ten days, led protests against UC Davis Chancellor Katehi, then two days later appeared in Mexico protesting labor  conditions for Mexican farmworkers, and a week later was seen on the steps of the State Capitol with the Alliance of Californians for Community Empowerment,  protesting in favor of a $15 minimum wage. Hampton, who goes by the name KwameKahlo on Twitter, and is a self-described “Marxist Leninist☭” is either a trust ­fund baby, a highly ­committed cause omnivore, or a pro who is paid by the protest. (Hampton has recently limited access to her Twitter page)

As an added bonus, this past month, Hampton was burning the American Flag (Warning:  Explicit Language Used): https://www.youtube.com/watch?v=pOgXrx6hDR0

When you pay people to show up at your protest, how sincere can your  cause really be? The travel, food and countless hours holding a protest  sign, marching and screaming with a bullhorn or at a reporter’s camera has an  associated cost.  Who, in the end, has time to protest – unless it is as a paid profession?

To understand how the other two percent  lives, though, just follow the money.  Much of the money for these protests flows from so ­called charitable and “philanthropic”  foundations, endowments, unions or wall street and hedge ­fund billionaires like Tom  Steyer and George Soros (see charts below). They distribute money to one organization — or to many —  that then funnel their millions of dollars downward to other groups and individuals, (the same way ACORN did) from  non­ profit causes to church groups and a few for ­profit entities that take care of details  like arranging transportation, printing signs, taking out permits, and the like. 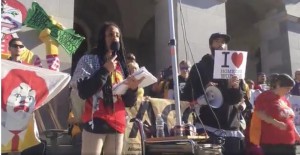 Many of  these people are hired to help build the movement and protest for the specific causes  listed in grant proposals and invoices long before the news crews arrive.

The next time you see Maile Hampton or any protester in a yellow shirt with ACCE across it  or the logos of other familiar or unfamiliar organizations, remember, those efforts are likely not coming from the heart, but from an invoice, which is attached to a check. 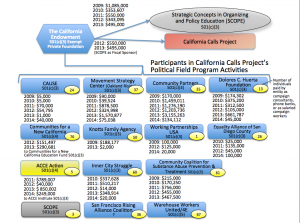 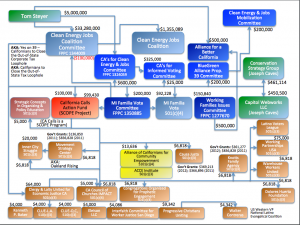 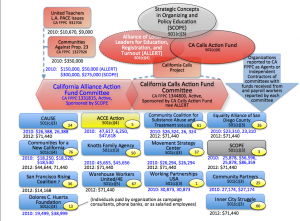 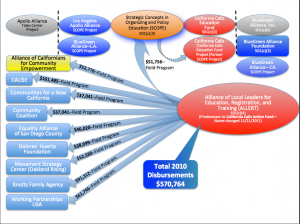