Violence is the last refuge of the incompetent

California’s capital city of Sacramento has a big problem: violent criminals are terrorizing Asian immigrants. City officials pride themselves on tolerance and diversity, but have responded with little more than political appeasement, leaving Asian communities afraid and vulnerable, and forcing them to take matters into their own hands.

A recent report in the Sacramento Bee found a crime wave has swept over South Sacramento’s Asian neighborhoods. According to the city’s crime report database, robberies in daylight, muggings, and frequent home invasions have targeted 300-400 Chinese immigrants. “Some residents have become so fearful that they’ve packed up and left Sacramento, said Tom Phong, owner of Welco Supermarket, who brought 2,000 signatures to the council demanding action. “We have nearly a dozen families who have moved out, even selling their house below cost just to get the hell out,” said Phong, who has lived in Sacramento for 35 years.”

“At least 300 to 400 Chinese immigrants in Sacramento have been victimized over the past few months, but many are reluctant to call police because of language and cultural issues, said community watchdog Winnie San, who has helped several victims,” the Bee reported. But the Bee was loathe to identify who is committing these violent crimes.

“The people gathered at Phong’s house said their assailants were not Asian,” the Bee reported. “Hua Cai Chen said he was shot during a robbery Aug. 23 about 2 p.m. in his driveway. He was returning from the grocery store with $15 worth of flour and other ingredients so he could prepare dim sum at home. As he exited his 2006 Acura, he was suddenly rushed by two unidentified men, one of whom pulled a gun and shot him in the calf during the struggle, Chen said Wednesday.”

The Bee and other news reports would not identify the violent criminals as black. Surveillance footage has gone viral locally of many of the home invasions and robberies in South Sacramento, showing mostly black robbers.

Community leaders went to the Sacramento City Council to plead for more patrol cars and a faster police response to muggings, robberies and home invasions, but came away with no satisfaction.

“After so many years and far too many instances of violent crimes against Asians, the community really has no choice other than to speak out,” Yih-Chau Chang, press secretary for Responsible Citizens of California,Guns.com reported. “Everyone has a breaking point and Asian Americans in Sacramento have reached theirs.”

From the Guns.com article:

RCC is a non-profit organization that promotes, educates and advocates for the right to carry in California, a right that an increasing number of Asian Americans are starting to exercise. In fact, Chinese community leaders in Sacramento have formed armed citizen patrols to combat crime. The patrol uses WeChat, an app that originated in China, to communicate needs for assistance.

“This is a lifeline for Chinese people,” said organizer Wei Xin Yang, who also noted the app is the only way some of the Chinese people will call for help.

“We need to take security into our own hands,” Yang added, “if not, who will protect us?”

A 2015 report from the FBI claimed to offer proof that violent crime is down in cities throughout California. However, the FBI stats did not include the affect of Proposition 47, passed in November of 2014. 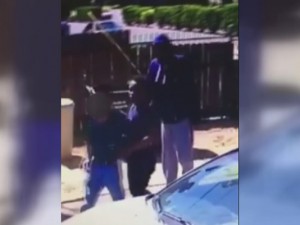 Recent local data show crime increased in 2015 throughout the state, and particularly in large cities, and is rising again in 2016.

Gov. Jerry Brown and Democrats are dismantling California, and undermining law and order.

Illegal immigrants are now registered to vote, thanks to a bill Gov. Jerry Brown signed in October 2015. Sex offenders are out on the street, increasing violent crime thanks to Prop. 47. The state has reduced prison time, and released many dangerous offenders thanks to AB 109. A million and a half Californians are unemployed, and one-fifth of the state’s labor force is underemployed. The exodus of businesses leaving California for healthier states continues.

Taken all together, and this adds up to a calculated dismantling of California, which once was known as the land of opportunity.

Prison Realignment and Prop. 47 – A Premeditated Crushing of California

“California has implemented an alarming cocktail of criminal justice “reforms” that are likely to lead to a major crime wave into 2016,” I wrote in the chapter on crime in Taxifornia 2016, by James Lacy. “In 2014, California voters were sold on reforming the state’s drug laws with Proposition 47. However, the measure covered more crimes than non-violent drug offenders. Moreover, drug addicts are likely to get less treatment in the state’s drug courts because prosecutors have lost a bargaining chip in the plea process. Add to it the court-ordered prisoner releases as a part of the state’s prison realignment under the 2011 AB 109 law, and you have a state ripe for a surge in crime; such as what is already underway in Oakland, which even after Jerry Brown’s eight years on-the-scene as Mayor, the FBI still considers one of the most dangerous cities in America.”

Gov. Jerry Brown vetoed a bill last October which would have cracked down on sex offenders who remove or disable their GPS tracking devices. This is all part of Brown’s prison realignment scheme.

The California Department of Corrections and Rehabilitation reports that 75 percent of recidivists commit their re-entry crime within a year of release. With AB 109 and Prop. 47 statistics potentially exploding with recidivist offenders, the Democrats in the Legislature passed Assembly Bill 1050, ordering the Board of State and Community Corrections to redefine “recidivism” in an obvious effort to manipulate recidivism statistics.

The Attorney General and BSCC have different definitions of “recidivism.” “There is no meaningful way for me to show recidivism rates now,” Sacramento Sheriff Scott Jones explained in a 2015 interview.

The previous definition of “recidivism” was “arrests,” rather than “convictions,” and it was within one year, not three years. When you re-classify something and no longer consider it a crime, the stats are going to drop.

Sheriff Jones said that in most instances, many crimes prior to passage of Prop. 47 that were previously “arrestable” as a felony are now only “citable” as a misdemeanor. “That means they may not be booked into jail but rather given a citation, like a traffic ticket, with a court date to appear, and released,” he said.

Prior to passage of Prop. 47, the Public Policy Institute of California reported the most recent national data showed California’s violent crime rate of 422 per 100,000 residents was higher than the national rate of 387, and ranked 16th among all states.  In 2013, 59 percent of violent crimes in California were aggravated assaults, 35 percent were robberies, 5 percent were rapes, and 1 percent were homicides.

Democrats, Jerry Brown and now Gavin Newsom want more gun-control. How will the Asians in South Sacramento react to that, since they’ve been left to fend for themselves?

This is Jerry Brown’s California.