Hotter, drier, longer forest fires we are witnessing today have nothing to do with dangerous manmade climate change. They have a lot to do with idiotic forest mismanagement policies and practices. 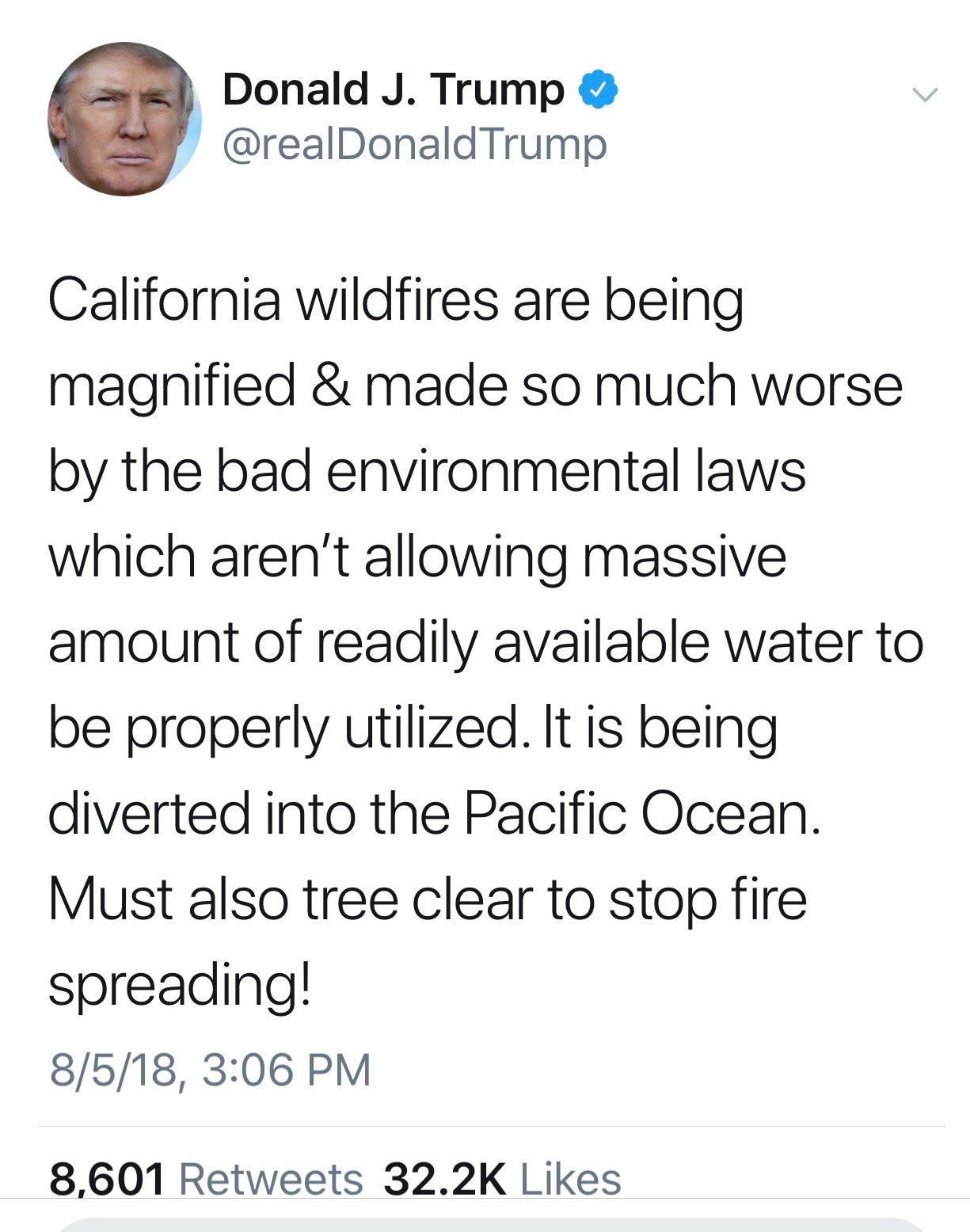 Death and Destruction is the “New Normal” in California

This past week, the New York Times reported on the California’s wildfires stating that “Since 2012, according to state emergency management officials, there has not been a month without a wildfire burning — a stark contrast to previous decades, when fire officials saw the fall and winter as a time to plan and regroup.”

Since 2012, according to officials, there has not been a month in California without a wildfire burning — a stark contrast to previous decades https://t.co/xiGR2LIusA

It is interesting that the New York Times mentioned the 2012 date, but only attributed the wildfire increases to “the recent historic drought,” and “rising temperatures,” caused by climate change. Nothing could be further from the truth.

As California burns, many Californians have been asking why the dramatic increase in wildfires in the last five years? Except for Governor Jerry Brown. Governor Brown claims that devastating fires are the “new normal.” Supporting Obama-era regulations along with Gov. Brown’s veto of a critical wildfire safety bill have resulted in the new normal: an endless and catastrophic fire season.

Under Agriculture Secretary Tom Vilsack, “the Obama administration finalized a rule governing the management of 193 million acres of national forests and grasslands, establishing a new blueprint to guide everything from logging to recreation and renewable energy development,” the Washington Post reported in 2012. “The rule will serve as the guiding document for individual forest plans, which spell out exactly how these lands can be used.”

These Obama-era regulations introduced excessive layers of bureaucracy that blocked proper forest management and increased environmentalist litigation and costs– a result of far too many radical environmentalists, bureaucrats, Leftist politicians and judicial activists who would rather let forests burn, than let anyone thin out overgrown trees or let professional loggers harvest usable timber left from beetle infestation, or selectively cut timber.

“Eco-purists want no cutting, no thinning – no using fire retardants in “sensitive” areas because the chemicals might get into streams that will be boiled away by conflagrations. They prevent homeowners from clearing brush around their homes, because it might provide cover or habitat for endangered species and other critters that will get incinerated or lose their forage, prey and habitats in the next blaze. They rarely alter their policies during drought years.”

“The resulting fires are not the “forest-rejuvenating” blazes of environmentalist lore. They are cauldron-hot conflagrations that exterminate wildlife habitats, roast bald eagle and spotted owl fledglings alive in their nests, boil away trout and trout streams, leave surviving animals to starve, and incinerate every living organism in already thin soils … that then get washed away during future downpours and snow melts. Areas incinerated by such fires don’t recover their arboreal biodiversity for decades.”

In the early 1990’s the Clinton administration embraced the Forest Stewardship Council following the Rio Earth Summit. The FSC was created “to promote environmentally sound, socially beneficial and economically prosperous management of the world’s forests.”

Yale 360 contributor Richard Conniff explained: FSC was to work with the timber industry “to set standards covering the conservation and restoration of forests, indigenous rights, and the economic and social well-being of workers, among other criteria. For industry, FSC certification promised not just a better way of doing business, but also higher prices for wood products carrying the FSC seal of environmental friendliness.”

It was an epic fail. All industries using timber-related products were extorted into becoming “FSC Certified.” Paper products, furniture, construction, cabinets, power poles, and hundreds of industries use timber.  “A quarter-century later, frustrated supporters of FSC say it hasn’t worked out as planned, except for higher prices: FSC reports that tropical forest timber carrying its label brings 15 to 25 percent more at auction,” Conniff reported. “But environmental critics and some academic researchers say FSC has had little or no effect on tropical deforestation.”

Prior to FSC Certification, environmentalists refused to acknowledge that timber had been prized as a renewable, recyclable natural resource, and the timber industry prioritized proper care of forests.

Fast forward to the George W. Bush administration: “In June 2009, a federal judge sided with environmentalists and threw out the Bush planning rule that determines how 155 national forests and 20 national grasslands develop individual forest plans, governing activities from timber harvests to recreation and protecting endangered plants and animals. Clinton appointee, Judge Claudia Wilken of the U.S. District Court for the Northern District of California ruled that the Forest Service had failed to analyze the effects of removing requirements guaranteeing viable wildlife populations (Greenwire, July 1).”

By 2012, the Obama administration issued a major rewrite of all of the country’s forest rules and guidelines.

In 2015, Washington D.C. District Court Judge Ketanji Brown Jackson, an Obama appointee, rejected claims from a coalition of timber, livestock, and off-highway vehicle organizations that the Obama sustainability provisions in the 2012 Planning Rule would cause an economically harmful reduction in timber harvest and land use and an increase in forest fires. “Defendants Klamath-Siskiyou Wildlands Center and Oregon Wild, represented by the Western Environmental Law Center, as well as The Wilderness Society and Defenders of Wildlife, represented by Earthjustice, argued that existing federal law provided ample authority for the Forest Service to promulgate the Planning Rule provisions, which place emphasis on ecologically sustainable forest management,” Earthjustice reported.

As with the Clinton administration in the 1990’s, the Obama administration worked against all drilling, mining, ranching, farming, property ownership, and made it happen through the 2012 eco-terrorism regulations.

Radical environmentalists have a very narrow view of nature, not recognizing that without proper land management, which means an appreciable amount of logging, clearing dead brush, and creating fire roads, these activists are actually hurting wildlife and the long term health of the forest and endangering human lives. Yet, environmentalists believe that people cause climate change, so maybe this death and destruction is environmental justice in their never-ending quest for sustainability.

*Megan Barth and Katy Grimes contributed to this article.