California Legislators and Gov. Jerry Brown think their job is to stay in power, and that bills to further their leftist agenda are the vehicles. The Oroville Dam spillway breakage is proof of this.

While Gov. Jerry Brown and legislative Democrats have prioritized illegal aliens, refugee, inmate sex change operations, building houses for the homeless, transgender bathrooms, climate change awareness, and hiring Eric Holder to undermine the Trump administration, the Oroville Dam was crumbling. And they knew it. The San Jose Mercury News reported the California Department of Water Resources and 27 water agencies ignored serious warnings 12 years ago because they did not want to incur the extra costs. So they said the repairs were unnecessary.

Thanks to record winter storms, the Oroville Dam (north of Sacramento) is nearly full. However, water levels were nearing the top of the dam by last Friday. State authorities and engineers on Thursday began releasing water from the dam after noticing that large chunks of concrete were missing from a spillway.

“On Saturday, water levels rose so high that an emergency spillway was used for the first time. Officials initially believed the measure worked,” the Los Angeles Times reported. “But on Sunday afternoon, as more water from record storms flowed into Lake Oroville, officials detected a hole in the emergency spillway.”

Officials said they feared the damaged spillway could unleash a 30-foot wall of water on the town of Oroville.

And while 188,000 residents were being evacuated, Gov. Brown was silent. Most governors immediately take to the television cameras and airways to talk to the people about the crisis at hand. Brown was conspicuously silent. His office finally issued nothing more than a press statement.

What tragedy will it take for the people of this state to hold elected politicians and government officials accountable? No amount of social services, genderless bathrooms, welfare, EBT cards and free tuition can possibly account for what has happened to California at the hands of the most radical political leftists the state has ever seen.

The Game of Politics

Democrat Leftists in the State Legislature are proposing providing in-state tuition for refugees, yet too many working class families cannot afford to send their kids to California colleges and universities.

These same legislative leftists have proposed a bill to use taxpayer money to fund beach vacations for the poor. AB 250, by Assemblywoman Lorena Gonzalez Fletcher (D-San Diego), requires the California Coastal Conservancy, the state agency in charge of preserving California’s 840 miles of coastline, to develop a “Low Cost Overnight Accommodations Program” for the poor, because “visiting on the coast has become prohibitively expensive for many Californians.”

These same leftist lawmakers have a package of bills to provide lawyers and public defenders to illegal aliens facing deportation. One of the bills in the package requires taxpayers to pay for the legal defense of illegal aliens.

Another leftist proposal by Sen. Ricardo Lara (D-Los Angeles), an admitted anchor baby, is a bill requiring voter approval of a border wall project “that would harm California’s environment, such as endangered species of wildlife and river watersheds, or California’s economy, through trade and tourism.”

Senators Toni G. Atkins (D-San Diego) and Scott Wiener (D-San Francisco), members of the legislative LGBT Caucus, have proposed SB 179, “The Gender Recognition Act of 2017,” that will enable “more transgender, intersex and nonbinary people to obtain state-issued identity documents that accurately reflect their gender.” The reason? According to Sen. Weiner, “Our trans brothers and sisters are under attack in far too many parts of this country and this world.”

Sen. Atkins has also introduced SB 2 to create a permanent source of funding for low-income housing.

This legislative abuse of taxpayer money is a perfect example of how far left the California Legislature has moved, compared to the rest of the state and country. These bills also demonstrate that California legislators and politicians are fiddling in identity politics and nonsense laws while the state infrastructure is neglected, and now falling apart. As the Governor has struggled to balance the state budget due to the state’s massive debt and unfunded pension liabilities, his administration has cut infrastructure funding, and stolen local revenues from cities and counties.

There is no governing taking place in the California Legislature or from the governor. It’s all a game to them; they want to hold elected office, but don’t want any responsibility.

Who will Jerry Brown blame for the Oroville Dam breech? I’m sure it’s George Bush’s fault. Many blame ballot box budgeting, and claim ballot initiatives have made it harder to raise money for infrastructure. But that’s just not true.

Ed Ring with the California Policy Center explains what’s really behind the problem:

(1) Powerful environmentalist organizations, often receiving government funds, provide the moral cover for neglect. There isn’t a road, a bridge, a power plant, a port upgrade, new housing, a water treatment plant – not one scratch in the ground that isn’t bitterly contested by the environmentalist lobby.

(2) Many corporate special interests benefit from neglect. Corporations who own existing sources of supply can charge higher prices and generate higher profits. Utilities are the obvious examples of this – ever since “decoupling” legislation was passed in California, the only way utilities can generate higher profits is to raise unit costs, since unit output and profit percentages are fixed by law. So if water costs $2.00 per CCU instead of $0.25, or if electricity costs $0.50 per KWH instead of $0.05, utility companies make a killing for their shareholders.

(3) Public sector unions also benefit from infrastructure neglect. Taxpayer funds that ought to be paying to construct and upgrade roads and bridges end up being allocated instead to pay government workers higher salaries and fund generous pensions. 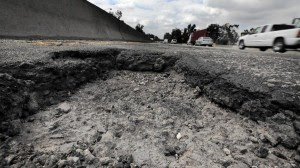